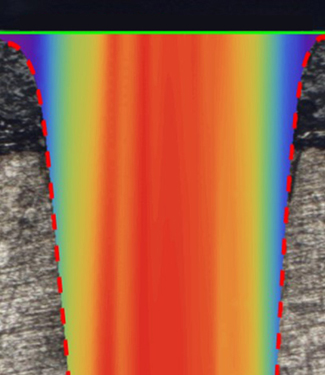 In laser material processing (LMP), the simulation of processes has developed significantly over the past few years. Specialist R&D center, the Fraunhofer Institute for Laser Technology in Aachen, Germany, recently commented that today’s LMP management software “can predict relatively well what will happen to a particular workpiece”. But the specialist R&D organization added, “Unfortunately, such prediction is also highly complex and requires a lot of computing time.”

But now, thanks to ingenious simplification, the Fraunhofer ILT is offering what it calls the first-ever simulation software that calculates laser materials processing in real time while running on tablet computers and smartphones.

Previously, the reliable simulation of laser processes was a job for experts. Armed with sophisticated software packages and after many hours on computer clusters, they have been able to simulate a wide variety of processes with a good degree of reliability. But this kind of elaborate work is hardly suitable for ordinary users in factories, contends the ILT, because they tend to rely on the laser system providers’ technology tables when setting up new processes.

Fraunhofer ILT simulation experts have developed new software that requires much less in the way of resources, such that it can even run on tablet computers and smart phones. Individual parameters can be adjusted using virtual sliders – such that the simulation result appears in an adjacent window and changes in real time.

This is made possible by an application-specific reduction of the computing models, a process in which certain simplifications are introduced depending on the respective application. Because these simplifications dramatically reduce the complexity of calculations, they produce a result much more quickly.

Conventional simulation programs deliver a complex representation of the processes involved in the interaction of laser beam and material. For example, more than anything else, users are interested in things like how the conicity of a drill hole changes when parameters such as focal position or spot diameter are adjusted.

The simplified simulation allows the influence of such parameters to be properly investigated, and the results match up with experimental data very well: The pictures above and below show just such a simulation using the new computing model compared to the thin section of a drill hole. In contrast to earlier methods and to regular experiments, now the effects of changed parameters are displayed immediately. Changing individual parameters is virtually child’s play, and the results appear instantaneously in the adjacent window on the screen.

Torsten Hermanns, Fraunhofer-ILT spokesman, explained who the app is intended for: “It has been developed especially for industrial everyday tasks, for example iterative design. The target group consists of system developers as well as machine operators. A notable advantage of the app is to provide results in real-time and interactively on portable devices. In contrast, classical PC-simulations typically need much more time to produce results and are not portable: The user has to leave the machine hall or the laboratory, and rapid interactive use is typically not possible so the app accelerates everyday tasks like iterative design enormously.”

He added, “It can be used for rapid iterative design by machine operators, as well as for the better understanding of processes, by system developers and R&D institutes such as F-ILT. We developed it in response to increasing demand from our customers. Initially we developed it to be able to answer their questions. Then, more recently, we got more and more requests for software tools operable by the customers themselves. So the app is now available by a software license model.” 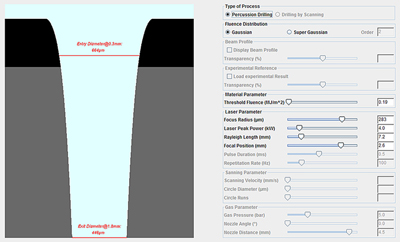 In AsymptoticDrill, the new license software, parameters can be changed using sliders.

The high speed of simulation also opens up a range of entirely different options, such as metamodeling. Suitable for complex simulations with many parameters, metamodeling involves generating high-dimensional data sets with the parameters and several evaluation criteria for process and product quality. These sets can then be used to create individual process maps (hyper slices) that show the dependency of the results of individual parameter pairs. The quality of a result is always displayed using color coding so that optimum parameters are immediately visible.

This advanced simulation makes it possible to find global and local extreme values – for example, parameter sets for best and worst quality – through mathematical manipulation of the data sets. Such simultaneous optimization of multiple parameters is scarcely possible by experimental means. This means that new methods in manufacturing such as those of iterative design can be executed much faster.

The idea for the new software developed out of a particular order for a large customer. Further contracts have been concluded in the meantime, but the software is available for all customers. Depending on the planned application, it will be specially modified by the experts at Fraunhofer ILT to facilitate optimum results. The know-how resides in the skillful simplification of traditional models.

Fraunhofer ILT says the software’s potential could be greater; time-intensive calculations exist in many areas of industry. In the automotive sector, for example, the simulation of crash tests still uses up considerable computing capacity. Transferring the principle of reduced models promises substantial savings there, too.