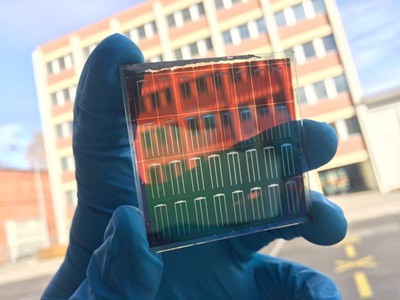 Researchers in Switzerland have come up with a new way to make perovskite-based solar cells at a very low temperature – suggesting that they could be produced using a simple roll-to-roll evaporation process in the future.

Although the technology remains at an early stage of development, perovskite photovoltaics has emerged over the past couple of years as a potentially low-cost way to increase solar cell efficiencies.

Used in tandem cell designs with conventional silicon cells they could raise conversion efficiency towards 30 per cent – far beyond what is currently possible – with advocates of the technology suggesting that this could be achieved at only a tiny additional cost.

Earlier this year, a team from IMEC in Belgium said that it had made a small perovskite PV module with 12 per cent efficiency, and that it might be possible to reach 35 per cent with a tandem formation.

However, Ayodhya Tiwori from the Swiss Federal Laboratories for Materials Science and Technology (EMPA) explains that state-of-the-art perovskite cells are usually produced with a high-temperature process. As a result, these cells can be susceptible to hysteresis – meaning that their efficiency performance is overestimated.

The hysteresis issue has also been highlighted by UK-based Oxford Photovoltaics. Last year, the company's CTO Chris Case told optics.org that it could be a "commercial disaster" if not addressed.

Sputtering ZnO
Writing in the open-access journal Nature Communications Tiwori and colleagues state: “It is imperative to eliminate the hysteresis, which is not only important to ensure a stable performance but also to unambiguously evaluate the real device efficiency.”

The new method shows that it is possible to make perovskite cells with a maximum processing temperature of only 50°C, while avoiding hysteresis and maintaining good efficiency performance.

So far, the team - which has previously concentrated on copper indium gallium diselenide (CIGS) solar devices - has demonstrated a small-area tandem cell with a conversion efficiency of 20.5 per cent. In that design, the semi-transparent perovskite sub-cell sits on top of a CIGS sub-cell, enabling the overall structure to absorb more of the solar spectrum than either material on its own.

The 14.2 per cent efficiency perovskite cell absorbs from the ultraviolet through to the yellow part of the spectrum but transmits red and infrared light – which is absorbed by the CIGS sub-cell.

The processing method relies on sputtering a layer of aluminum-doped ZnO instead of the usual TiO2, followed by a spin-coating step to create the perovskite material through evaporation. Crucially, ZnO can be sputtered at a low temperature, whereas TiO2 is typically deposited at 500°C when making a perovskite cell. 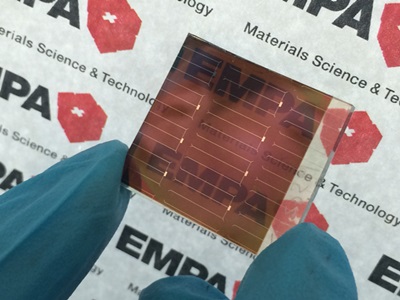 Flexible devices 'in reach’
Although only small-area cells have so far been made, the low-temperature method could be suited to mass production techniques like roll-to-roll processing. However, Tiwori admits that this remains some way off, saying:

“What we have achieved now is just the beginning. We will have to overcome many obstacles before reaching this ambitious goal. To do this, we will need lots of interdisciplinary experience and a large number of combinatorial experiments until we have found a semi-transparent high-performance cell together with the right base cell, and technologies for electrical interconnections of these solar cells.”

Despite that, the EMPA team writes in the paper: “Since the fabrication process for both the CIGS solar cell and for the perovskite cell are compatible [with] deposition on polymer films, lightweight and bendable polycrystalline tandem devices are in reach.”

And even though any perovskite-based products might be some way off, they do see various ways to further improve the conversion efficiency of the design in the near future.

Those include optimizing the bandgap of both the top and bottom cells, as well as using an anti-reflection coating and optical coupling media. Ultimately, it could be possible to produce much larger tandem cells with a 30 per cent efficiency - something that would reduce the cost of solar electricity dramatically.