The much-delayed James Webb Space Telescope (JWST) is now taking shape at NASA’s Goddard Space Flight Center, with the first parts of its 18-segment primary mirror about to be placed onto the instrument’s superstructure.

A #JWST mirror being mounted on the robot arm that will put it on the telescope. Stay tuned! https://t.co/z9BIb9D8Po pic.twitter.com/waVsg2iUYQ

One of the highest-profile optics projects in the world, the JWST is the successor to the Hubble Space Telescope and is currently scheduled for launch in October 2018. Once deployed, its unprecedented sensitivity in the infrared spectrum is expected give astronomers a view of the very faintest and earliest galaxies to have formed in the young universe. 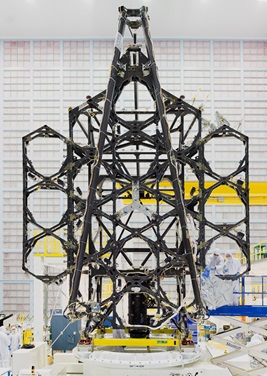 The main mirror structure now being assembled at Goddard comprises 18 gold-coated but lightweight hexagonal beryllium segments, tiled together to collect light from the very edges of the known universe. But the complete optical system also includes secondary, tertiary and fine-steering mirror to reflect the collected light into the scientific instruments on board JWST.

The last of the 18 primary mirror segments arrived at Goddard nearly two years ago, following more than a decade of work to fabricate them. That project was led by Ball Aerospace in Boulder, Colorado, as the principal sub-contractor to Northrop Grumman.

In August this year Northrop Grumman delivered a crucial piece of flight hardware – the black latticed structure shown in the image to the right, which is effectively the back-bone of the telescope - to NASA Goddard.

The next few months will see the flight mirrors and four scientific instruments mounted in the Goddard clean room. At the right-hand side of the images is an assembly stand with a robot arm that will be used to mount the mirrors onto the telescope structure. 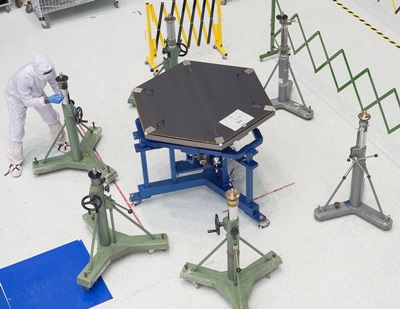 NASA’s flight instrument module, in which the scientific kit will be housed, is currently undergoing cryogenic tests but should be back in the clean room and ready for assembly next year.

Originally scheduled for launch in 2013, the complexities of the JWST include a whole host of innovative optical technologies that simply did not exist before being built for the mission.

Some of the telescope's highly sensitive mercury cadmium telluride infrared detectors had to be replaced earlier this year when a flaw was discovered in the original sensor design.