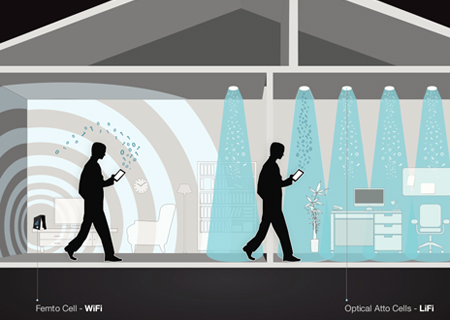 LiFi technology, which uses solar energy to create the power for the light-based Li-Fi communications system, is under development by a University of Edinburgh spin-out company, pureLiFi in conjunction with the department where the technology was first invented.

Lead scientist Professor Harald Haas recently updated the photonics community about the progress of Li-Fi communications with a presentation at the Institute of Photonics 20th anniversary at the technology Innovation Centre in Strathclyde University, Glasgow. He said, “This technology will have impact particularly for populations in rural communities that do not have existing infrastructures for electric power, the internet and Wi-Fi access.”

Professor Haas, who is pureLiFi’s CSO, explained that Li-Fi delivers a high-speed, bidirectional networked, mobile communications in a similar manner as Wi-Fi. “Although Li-Fi can be used to off-load data from existing Wi-Fi networks, implementations may be used to provide capacity for the greater downlink demand such that existing wireless or wired network infrastructure may be used in a complementary fashion. There can also be network security benefits”

He added that in more developed markets another problem can be that the wireless spectrum is overused so it can be difficult to add in extra wavelengths for communications. “Using the optical spectrum is a way to turn wavelengths delivered from LEDs into smarter communications environments that also save energy,” he said. 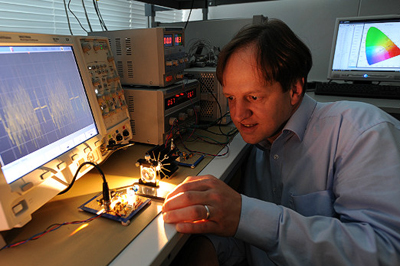 It's wireless but not as we know it. Professor Harald Haas, pureLiFi’s CSO.

“Basically we take digital data and change it into variations in brightness from the LED source can achieve 20-40Mbit, but we think that the next generation of li-fi perhaps based on blue sources could take us into the gigabit range. Taking different colors and using WDM we can transmit up to 10Gbit/s and with a combination of red, green and blue lasers we could go up to 100Gbit.

“We have devices in place that can increase the data rate of local networks by a factor of 10 pr square meter at the same time as improving energy efficiency and enabling safer communication sin risky environments such as in chemical plants.”

The prototype Li-F system was built in a collaborative partnership between the University of Edinburgh’s Li-Fi Research & Development Centre and spin-out pureLiFi, one of the global pioneers of using the visible light spectrum instead of radio frequencies to enable wireless data communication.

At this year’s TED Global 2015 event in London, Professor Haas also explained how the Li-Fi technology can be integrated with solar cells to receive data. He described how the likes of solar panels on houses or other objects such as smart watches can absorb power and receive data at the same time. “With this technology, so-called smart watches could be powered and connected to the internet through light.”

During his TED talk, Professor Haas stressed that over four billion people worldwide do not have access to the internet and with little energy infrastructure in developing countries to support traditional broadband and Wi-Fi, solar energy can bring transformational change to this situation. The potential expansion to the internet is massive and my aspiration is that this broadband solar panel receiver technology for Li-Fi will help solve the challenges of the digital divide throughout the world.

The TED talk video can be seen here: