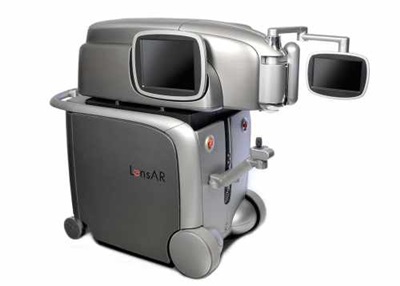 Lensar, the Orlando-based company specializing in femtosecond laser systems for ophthalmology applications, is set to be acquired by Californian ‘lifestyle healthcare’ firm Alphaeon.

Valued at a $59 million combination comprising cash, stock, and (mostly) assumed debt, the deal is scheduled to close by the end of this year.

Lensar is one of a number of companies to have pioneered the use of ultrafast lasers in cataract and refractive procedures. Others include Optimedica, which was acquired by healthcare giant Abbott for $400 million back in 2013, and Technolas Perfect Vision, now part of Bausch + Lomb.

By virtue of the potentially huge and growing market for cataract surgeries in an ageing global population, many of those companies have attracted large valuations – none more so than LenSx, which in 2010 was sold by its venture backers to Swiss eye care giant Alcon for $744 million.

Despite the technological advantages of a proprietary 3-D imaging system that is incorporated with its femtosecond laser systems, Lensar does not appear to have fared as well as its competitors.

PDL loan
Back in October 2013, Nevada-based PDL Biopharma agreed to loan Lensar up to $60 million. That deal was part of a wider investment in Lensar that also included $27 million in venture equity from Aisling Capital, Florida Growth, and Florida Opportunity Funds.

PDL is a tiny but hugely profitable company that makes money by generating royalties on a variety of healthcare assets that it has acquired and licensed to major pharmaceuticals firms. Those include drugs like Herceptin and Agastin, used to treat various advanced and metastatic cancers. More recently, the company has diversified with investments such as the credit agreement with Lensar.

The agreement included an initial tranche of $40 million, with the additional $20 million contingent on the laser system company hitting certain performance targets. However, it has since emerged that PDL was charging interest at an annual rate of 15.5 per cent.

Lensar was unable to keep up with the interest repayments, and in May 2015 the two parties entered into a forbearance agreement. That provided Lensar with up to a total $9 million in weekly increments through September 30, while it either raised new capital or sold the business to repay the outstanding loans.

The terms of the new deal also included the appointment of a “chief restructuring officer” and an increase on the interest rate to an even more punitive 18.5 per cent.

Rescue deal
Alphaeon, which according to its sole US Securities & Exchange Commission (SEC) filing raised $27 million equity funding in early 2015, appears to have come to Lensar’s rescue - assuming that the $59 million deal to buy the company goes through as planned.

The Irvine firm says that Lensar will enable it to provide the femtosecond laser technology to a network of more than 2,000 ophthalmologists.

Alphaeon CEO Robert Grant said in a company announcement: “Lensar has advanced the self-pay category of precision refractive surgery both for ophthalmologists as well as their patients. The addition of Lensar to our lifestyle product portfolio will provide ophthalmologists with another alternative to expand their offering to patients.”

In the same statement Lensar CEO Nick Curtis added: “The opportunity to partner with Alphaeon furthers Lensar’s commitment to provide ophthalmologists everywhere with the latest developments in premium vision surgery.”

Lensar’s laser system is designed to provide cataract surgeons with the ability to carry out very accurate incisions, said to improve intraocular lens (IOL) lens positioning for each individual patient.

At the time of the October 2013 credit agreement, PDL had described it as the “only femtosecond laser on the market which uses a proprietary imaging, automated measurement, 3-D modeling, and treatment guidance system”.

It had been cleared by the US Food & Drug Administration to perform both corneal and arcuate incisions, as well as lens fragmentation and anterior capsulotomy (with or without phacofragmentation), during cataract surgery.