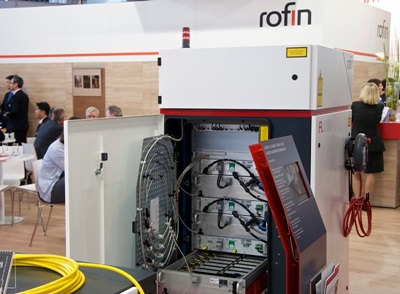 Major industrial laser vendor Rofin-Sinar has posted a slight decrease in sales for its latest fiscal year, with a sharp rise in fiber laser shipments masked by foreign currency effects.

For the 12 months that ended September 30, the company – which has twin headquarters in Hamburg, Germany, and Plymouth, Michigan – reported revenues of $519.6 million. That represented a 2 per cent drop on the previous year, although Rofin’s management said that the strong US dollar effectively reduced the fiscal 2015 sales total by nearly $50 million.

On the plus side CEO Thomas Merk, who took over from Günther Braun in the summer, said that unit sales of high-power fiber lasers had jumped 80 per cent year-on-year in the latest quarter. He told investors:

“Our third generation high-power fiber laser business is progressing very well. On a sequential basis, we were able to increase quarterly unit sales by roughly 50 per cent and it is our target to achieve a growth rate of this magnitude in fiscal year 2016.”

Part of the reason for that is the more powerful fiber laser modules around which the Rofin products are now based, and the increasing incorporation of Rofin’s own laser diode components that are manufactured in-house rather than bought from merchant suppliers.

That allows Rofin to price its fiber laser more competitively, although it is critical that the laser diodes are produced with high yields for the strategy to work. In an investor conference call, Merk indicated that the company had got to grips with diode production in recent months, saying:

“We have been able to improve on the yields recently, quite substantially, by solving some of the technical issues on the production side.”

Key targets
The CEO added that the company had two key targets for 2016. The first of those is to further improve internal chip production, which will help with overall profitability, and the second is to raise the power of its fiber laser pump modules.

“We don't want to talk about a fourth generation [yet] but we expect that we should be able to increase the power of the pump module by roughly 20 per cent,” he said.

Achieving higher yields with diode production may help assuage some of the criticisms that Rofin has received from activist investor Silver Arrow, which now owns nearly 10 per cent of the laser company’s shares and is seeking both a radical shake-up of Rofin’s board of directors and a more simplified operational structure.

Silver Arrow and its CEO, Thomas Limberger, have publicly criticized the existing Rofin management team, focusing on various perceived weaknesses – for example questioning the need for headquarters in both Germany and the US - that they say are impacting profitability.

Merk highlighted that the company was now consolidating facilities in both Germany and Switzerland, moves that should save Rofin around $5 million in fiscal 2016.

Weak outlook hits stock price
Silver Arrow has also accused Rofin of a late entry into high-power fiber lasers that has allowed IPG Photonics to race ahead of its rivals and dominate one of the fastest-growing segments within the laser industry.

Merk seemed to pick up on this in the investor call, repeatedly saying that the company had begun working on its own fiber lasers back in 2007 and was one if the industry’s first movers in this area. He also indicated that Rofin was making some inroads into the machine tool industry's second- and third-tier players with its high-power fiber sources.

Total sales of all fiber lasers - not just high-power sources - reached $94 million in the latest fiscal year, the CEO said. And while that represents a substantial increase, in comparison IPG's annual sales look likely to top $1 billion next year.

With Rofin's sales of ultrashort-pulse lasers also rising fast, Merk and his colleagues are confident of a successful 2016. But the stock market appeared disappointed by their forecast of higher profits but only a small increase in total sales to around $535 million next year.

As a result, the company’s stock price dropped by around 8 per cent in value in the two days following the quarterly update, closing at $27.49 on November 13 – equivalent to a market capitalization of around $775 million.

However, analyst Joe Wittine at Longbow Research sees that price as something of a bargain, writing: "We do not see [Rofin] taking a sizeable bite from IPG's high-power fiber market, but at this valuation we think investors are getting a free option on [Rofin] winning some new OEMs."