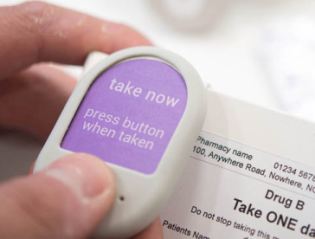 A new route to low-power displays built on plastic substrates could lead to several new applications for flexible screens, signs and tags.

Developers Folium Optics of Bristol, UK, is initially bringing the technology to market in the healthcare and defense sectors, but expects its displays to be ultimately used across a number of distinct application areas.

The absence of a backlight significantly reduces the power consumption of the display, and tackles the inherent optical inefficiency of a traditional backlit design in which only a modest percentage of the light emitted may ultimately make it to the viewer's eye. Reflective displays exploit instead the ambient light available, reflecting it back to the observer.

"The combination of these two features means that we can start to use displays in novel ways and tackle new applications," Kitson said.

Two uses in particular have been Folium's initial targets. One is a display tag, developed with funding from NHS England's SBRI Healthcare scheme, intended to help tackle the problem of poor medication adherence - the tendency of patients to neglect the taking of medicine after drugs have been prescribed.

A smart tag attached to a medicine packet and connected to a cloud network would tell a patient when they should be taking medication and log when they have done so; a solution hard to visualize through any route other than a small cost-effective display, according to Kitson, who indicated that clinical evaluations will begin within the next twelve months.

The other application is in the defense sector, where thin robust plastics able to change color could offer significant advantages over existing camouflage methods.

"Camouflage is an application where customers have a tolerance for high technical risk, but we expect that we can nonetheless apply that experience to improve aspects of our low-power displays in more basic markets; a longer battery life, for example," commented Kitson. "The two products are more joined up than it might appear."

A revitalized technology
Folium Optics was founded two years ago by Kitson and John Rudin, after both had worked on display solutions at Hewlett Packard's HP Labs Bristol research center. When HP's goals shifted, the pair set up Folium to pursue flexible displays, and rather than basing their efforts on any existing HP technology, chose to begin with a clean sheet - "applications-driven and technology-agnostic," commented Kitson. 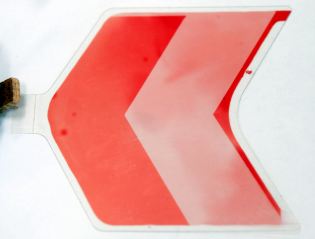 The company has since doubled in size to eight employees, and is currently moving out of incubator space at the University of the West of England and into larger premises, to accommodate its own in-house cleanroom and prototyping capabilities.

One part of the company's core competence is based on an existing form of liquid-crystal display (LCD) technology, as Kitson explained.

Controlling the profile that the dye molecules present to an observer also controls the strength of color perceived by that observer, and does so without the need for the polarizers or related technology which can contribute to the cost and complexity of other LCD systems.

"This principle is called a guest-host LCD and has been known for some years, although it went out of favor as interest focused on backlit displays," noted Kitson. "It has been a little neglected; so we are revitalizing it, improving the materials and combining them with flexible plastics."

High visibility
The company recently participated in the Collaboration Nation event organized by Innovate UK as a channel for small technology companies to connect with potential sources of funding.

At the meeting, Folium's Alexander Webb described the potential market for high-visibility signs, tags or animated markings based on the flexible plastic displays, particularly for road safety applications. Such markets will need suitable cost-effective manufacturing techniques, something the company discussed with interested parties at Collaboration Nation.

"Standard production processes are high-precision and slow," said Webb. "For some applications of interest to us where the displays are fundamentally quite simple, we may be able to use printing-based processes, rather than precision electronics procedures."

In the meantime the company is also looking for partners able to apply its flexible plastic display technology in real-world use, and for cases where current high-visibility markings or LEDs could be effectively replaced with more effective flexible solutions.

"The economics of developing production processes for new technology such as this can sometimes stall its translation into suitable markets," said Kitson. "Our solution is to try and find applications that can be met with the new capabilities of flexible plastic displays, and use those to start to raise demand. So our next step is to engage directly with potential customers."

A demonstration video of Folium Optics plastic display technology as it could be applied in adaptive camouflage applications in the defense sector.