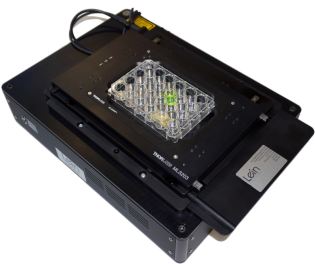 The size and cost of metrology systems presents a hurdle to their wider acceptance in several attractive market sectors, as both developers and potential users are aware.

Lein Applied Diagnostics based in Reading, UK, believes that it has identified a solution, through its development of more cost-effective and convenient platforms able to measure thickness, position, refractive index and other valuable metrics.

Founded in 2003 by developers with backgrounds in the optical telecoms market, the company's guiding principles have involved taking technologies from that sector and developing them for use elsewhere, with biomedical applications an initial target.

"Our first step was developing a platform for non-invasive measurement of blood glucose levels, using a laser-based sensor shone into the eye," said company co-founder and CEO Dan Daly.

"As an alternative to the analysis of blood drawn from a patient, this has several clear advantages which were borne out by clinical trials. From there, Lein expanded into related ophthalmic metrology, such as direct measurement of key ocular parameters like corneal thickness, and monitoring the critical dimensions of contact lenses during their manufacture."

The bulk of the company's technology is based around the use of confocal optics, stemming from the development of a proprietary low-cost confocal sensor capable of carrying out distance and thickness measurements on both organic and inorganic materials.

More recently Lein has also been involved in developing an interferometry-based solution for a particular application - an example of the company's versatility, according to director Graeme Clark.

"Much of our business involves confidential contracts with clients, largely because of the nature of the technology and the specialist markets using it," he commented. "In this particular case we were tackling the problem through confocal technology, but realized that it would be better to do so with an interferometer. This was built, demonstrated and transfered into the target application relatively quickly."

Lein recently took part in the Collaboration Nation event, organized by Innovate UK as a channel for small technology-driven UK companies to pitch for potential collaborators. For Lein, the event allowed it to describe a planned method for improving the sensor's light collection capabilities, that could boost applicability in cases where the measured surface is rough or the material is difficult to measure with an existing platform.

The company is currently looking for potential partners interested in industrial metrology, with a view to further developing this technology for new applications and markets.

Drug absorption and distribution
A core component in Lein's confocal sensing systems is the company's Dione sensor/detector module, which is also available as a stand-alone product.

"Dione is an example of a technology spun-out from our telecoms background," noted Daly. "In fiber-optic communications, transceivers at either end of the comms link both transmit and receive signals, to maximize the useful bandwidth of the fiber. It occurred to us that we could adapt certain types of transceivers to become sensors, making for a cost-effective and compact unit exploiting well-understood principles and telecoms-qualified components." 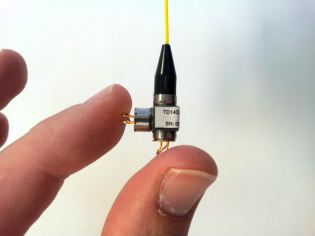 The Dione module uses a 1310 nm light source, and according to Lein's product data provides sub-micron resolution over a working distance of 19 microns to 400 mm.

"Confocal systems currently tend to be large and expensive, but our goal is to develop hand-held meters with micron resolution," Daly commented. "That has driven our use of telecoms-inspired principles like the ones in Dione, in turn allowing new ideas for potential applications to start cropping up."

One of those new avenues has been pharmacokinetics, the non-invasive measurement of drug absorption and distribution within a biological system, without the need to draw blood.

Leveraging its experience of ophthalmology and working in collaboration with Durham University and the University of Strathclyde as well as a US pharmaceutical company, Lein is developing an instrument capable of tracking the diffusion of fluorescent drugs in the anterior segment of the eye.

It uses a 405 nm source, scanned through the eye's anterior chamber, and records fluorescent light within a specific wavelength range excited by the laser as it returns from the eye. Tests using ex vivo experiments and in vivo animal models have confirmed the instrument's sensitivity and ability to track the diffusion of fluorescein tracer molecules in the eye.

"The same principles could lead to applications assessing drug transfer through the skin, or perhaps more broadly examining scenarios involving cosmetics, skin hydration or sunscreen," commented Daly. "The ability to easily measure those kind of pharmacokinetic parameters in the body could open up a whole range of possibilities."

Those could also include cancer studies, where the ability to monitor the diffusion of anti-cancer drugs or indeed the spread of the tiny tumoroid cancer cells themselves will prove highly valuable.

A further potentially valuable application field has opened up through Lein's collaboration with a manufacturer of collagen, used in the burgeoning tissue engineering industry. Accurately measuring the thickness of collagen as it grows in the well plates used to produce it in the laboratory can be tricky; but Lein's confocal technology offered a novel non-invasive means of monitoring this vital parameter.

All these markets represent the potential versatility of a compact cost-effective confocal system, according to Graeme Clark.

"The technology behind our confocal and interferometry systems may be specialized, but the potential applications are vast," he commented. "The challenge for Lein as an SME is to identify where we can achieve the most bang for our buck."

• Lein Applied Diagnostics can be contacted via its website.