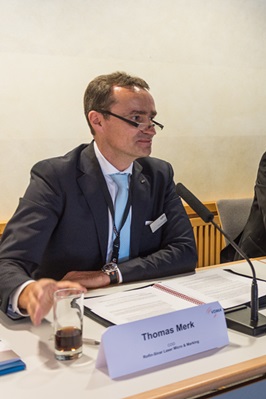 Rofin-Sinar has responded to scathing public criticism from activist investor Silver Arrow Capital Advisors, after the latter published a letter accusing the industrial laser company’s board of directors of myriad failings.

Now under the leadership of CEO Thomas Merk, who unexpectedly replaced long-term incumbent Günther Braun in the summer, Rofin published a statement noting recent improvements in its profit margins.

That came after Silver Arrow went public with a litany of accusations, chiefly that Rofin has been underperforming the wider laser market as a result of the strategic and operational decisions made by the current board of directors, including a late entry to the fiber laser sub-sector.

Silver Arrow owns around 9 per cent of Rofin’s outstanding shares. The letter, targeting stockholders and co-signed by partner and CEO Thomas Limberger, claims that the current board of directors has overseen various failures as a result of “misguided strategy, poor board oversight and ineffective management”.

In its eyes, that has led to Rofin’s stock price trading at a discount to its peer group and a falling market share. “Rofin…is burdened with numerous corporate inefficiencies, has missed out on growth opportunities and has not properly deployed capital,” claim Limberger and co. “Additionally, we believe Rofin's long-tenured board (15 year average) lacks the true independence needed to serve the interests of its stockholders.”

Momentum shift?
Rofin’s brief response pointed to what it said were “very strong financial results” in the company’s latest quarter, as evidence that recent efforts to drive growth and profitability are “gaining momentum”.

Central to that recent improvement has been the recent release of new and more efficient fiber laser pump modules and multi-kilowatt systems that the company believes will enable it to compete more effectively in the industrial market with fiber laser specialist IPG Photonics.

However, Rofin is not just battling IPG in this space. Rivals including Lumentum (previously JDSU), Coherent and nLight all showed off new multi-kilowatt fiber lasers at the World of Photonics trade show in Munich this summer, while IPG continues set new standards in efficiency and laser pricing.

Silver Arrow believes that Rofin would be able to compete more effectively if a number of changes were made, including the personnel at company director level. “New directors are needed to help refocus Rofin and add fresh perspectives with a greater focus on stockholder accountability,” it said, adding that it would nominate three new independent directors for election at Rofin’s 2016 annual meeting.

European consolidation wanted
The strongly worded "open letter", effectively a press release from Silver Arrow, also accuses Rofin’s current management team of ignoring its requests to open a “constructive dialogue”. Among several inflammatory statements, including some personal accusations aimed at the management team and its relationship with consultant Carl Baasel, it said:

“It has become apparent to us that the [Rofin] Board has no intention of working with us for the benefit of all stockholders. Instead, it appears that the members of the board merely want to protect their own personal interests and have chosen to ignore the numerous mistakes that Rofin has made.”

While brief, Rofin’s response to Silver Arrow did appear to hold out something of an olive branch, with the company saying that it would “welcome input from all shareholders towards our common goal of enhancing shareholder value”.

Whether that will extend to any of the changes demanded by the activist investor remains to be seen. Among the changes that it wants to implement is a reduced focus on Europe, where it also wants to consolidate the firm’s long list of operations, and a much greater focus on the fast-growing market for fiber lasers.

Sprawling operation
The somewhat disparate nature of Rofin’s sprawling global operation has been raised as a cause for concern previously, with analysts noting a lack of cohesion among the many different elements that form the wider Rofin group of companies.

Silver Arrow’s letter also picked up on this theme, claiming: “Globally there are more than 40 sites within this fractured organization, illustrating a lack of previous merger and acquisition integration.”

Rofin is also unusual in that it has two headquarters - one in Germany and one in the US - and is listed on stock markets in both countries, resulting in additional compliance and administrative costs. All are deemed unnecessary by Limberger and his colleagues.

Merk also comes in for personal criticism, suggesting that Silver Arrow had very little to do with his replacing Braun as CEO earlier this year. As the former COO of Rofin’s “micro” laser and laser marking units, the new CEO is held partly responsible for what Silver Arrow sees as the firm’s current failings.

“In our view, many of Rofin's numerous failings are operational in nature, and appointing the former officer partially responsible for these issues not only reflects poor judgment by the board, but will also compound the company's problems in the long run,” claims the investor.

Following the initial response by Merk and the Rofin management team, eyes will now turn to the company’s forthcoming full-year earnings statement and investor conference call, which is scheduled to take place November 12.