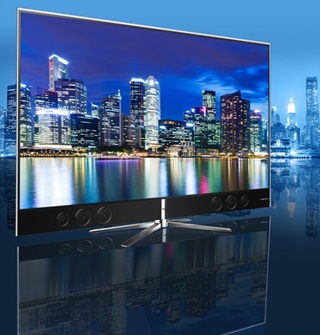 A row has broken out between two developers of quantum dot (QD) technology, as European authorities debate whether or not to ban the use of cadmium-based QDs in display screens.

As an extremely toxic heavy metal, the use of cadmium is highly regulated under Europe’s “Restriction of Hazardous Substances” (RoHS) directive. However, cadmium is also extremely useful for certain optical applications – for example in cadmium telluride solar panels made by First Solar, and in high-quality lenses for microscopes. As a result, the RoHS legislation includes a number of exemptions where cadmium is allowed.

Whether or not those exemptions should include TVs and other display screens - where the fluorescence of QDs is harnessed to improve color reproduction - is now becoming a bone of contention. Earlier this week Nanoco, a small UK company developing technology to produce cadmium-free quantum dots in volume, said that it was challenging the legality of cadmium-based QD displays by requesting an official investigation via a petition with the European Parliament.

In May, the European Parliament voted heavily against plans put forward by the European Commission to extend an RoHS exemption for cadmium in displays until July 2018.

However, since then QD-based LCD monitors and TVs from Philips and its affiliate TPV have started to appear on the European market, featuring QDs supplied by US-based QD Vision. Those screens are promoted as having the kind of excellent color reproduction and energy typically associated with organic LED displays, but at a much lower cost.

Legal basis questioned
Nanoco CEO Michael Edelman said in a company statement highlighting what Nanoco claims to be the “legal uncertainty” surrounding QD-enhanced displays in Europe: “There is no legal basis for keeping or allowing new cadmium displays in the market. Alternatives are readily available and the previous QD exemption expired with the [European] Parliament’s vote [in May].”

Massachusetts Institute of Technology (MIT) spin-out QD Vision, which has received heavy backing from venture capitalists, hit back immediately. In two statements, it questioned the motives and accuracy of Nanoco’s releases, describing them as part of an “ongoing public relations campaign” to exclude cadmium-based QDs from the European Union:

“In May of this year, the European Parliament asked the European Commission to review a recent decision to extend QD Vision’s exemption for using cadmium selenide based on its solution’s energy efficiency and a lack of competitive alternatives,” is its interpretation of the situation in Europe.

Rival technologies
Its CEO Mustafa Ozgen says that the cadmium selenide dots have “significant” advantages over rival technologies in terms of color gamut and energy efficiency that alternatives cannot yet match.

QD Vision claimed: “Nanoco continues its efforts to have products using its indium-based quantum dot technology introduced into the [European Union] display market, but there are none to date.”

According to the Massachusetts firm, the recently released Philips monitor is the first QD-based monitor on the market. “There is currently no monitor in the market using indium quantum dots,” it added. “Televisions based on QD Vision’s quantum dot technology have been on the market since 2013.”

A second statement from QD Vision went further, accusing Nanoco of making “manifestly incorrect and misleading” statements about the situation.

The company points to a press release from the European Parliament, in which the Parliament acknowledges that the May vote did not amount to a ban on cadmium QDs, but would trigger a new assessment of the technology and any potential alternatives.

“There are therefore no market distortions, as the current exemption remains valid until revoked,” stated the European Parliament announcement.

New developments
However, that release also pointed to some “important new developments” with regard to the availability of cadmium-free QDs, and described the European Commission’s key justification for granting the latest QD exemption – that cadmium-free QDs were not yet technically available – as “manifestly incorrect”.

“A whole line of TVs based on this technology has become widely available on the [European] Union market, by well-known major retailers,” it announced, in what appears to be a reference to indium-based QDs in new TVs from Samsung. Similar offerings from LG Display are expected, while Nanoco also points to new lighting products from Marl International that feature its cadmium-free technology.

QD Vision has dismissed such alternatives as inferior, with CEO Ozgen saying: “We look forward to a swift technical assessment of the alternatives in this exciting segment - one that will plainly demonstrate that safe and energy-efficient cadmium selenide QDs are the only competitive solution for Europe.”

Nanoco evidently disagrees with that opinion, adding that its partner Dow has completed a production facility to make cadmium-free QDs in Cheonan, South Korea, with commercial volumes expected soon. CEO Edelman reported earlier this year that the company was working with no fewer than 11 different display OEMs based in Asia and the US.

The UK firm, which is listed on the London Stock Exchange, could reveal more when it announces preliminary financial results next week.