Factory will scale to more than 3GW of capacity and produce more than 600 million silicon wafers annually. 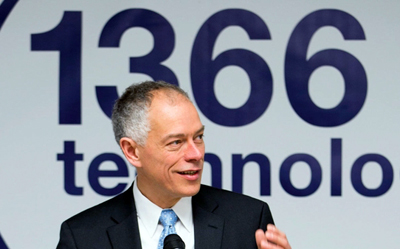 1366 Technologies, a manufacturer of economical silicon wafers for solar cells, has announced plans to build a new, “state-of-the-art”, commercial solar wafer manufacturing facility in Genesee County, NY, US. The location is strategically located between the cities of Buffalo and Rochester, the latter of which will be home to the American Institute for Manufacturing Integrated Photonics.

The company expects the new plant will eventually scale to 3 GW of capcity, house 400 Direct Wafer™ furnaces, and produce more than 600 million high-performance silicon wafers per year – which would be enough to power 360,000 American homes.

1366 (named after the solar constant, representing the power of solar energy hitting each square meter of the earth’s surface) will become the “anchor tenant” at the high-tech Science and Technology Advanced Manufacturing Park (STAMP) where the company plans to eventually create more than 1,000 new, full-time jobs in New York’s Finger Lakes Region.

Frank van Mierlo, CEO, 1366 Technologies, commented, “Our decision to expand the company’s operations here not only marks the largest business attraction success story in our history, but it also brings two great cities even closer together, strengthening our efforts to make Upstate New York a hot-bed for high-tech development.

“From day one, we have taken a deliberate, highly-measured path to scaling. The [first] facility in Bedford, Massachusetts was our proving ground. New York brings us to commercial scale. The technology is now ready and 1366 is squarely positioned to lead in an industry undergoing rapid global growth.”

1366 Technologies' Direct Wafer technology is a transformative manufacturing process that offers significant advantages over traditional cast-and-saw wafer production technologies. The process makes wafers in a single step, pulling them directly from molten silicon instead of today’s multi-step, energy- and capital-intensive approach. This approach cuts the cost of the wafer by 50% and reduces both capital expenditures and operating costs.

The site selection in New York state marks the start of a phased program to scale 1366 Technologies' Direct Wafer technology from 250MW to 3GW. 1366 Technologies will first construct a 250MW facility that will produce more than 50 million standard silicon wafers per year. The facility will quickly ramp to 1GW of production capacity and employ 300 people. “Our goal has always been two-fold: deliver solar at the cost of coal and manufacture – at scale – in the United States,” said van Mierlo. “Today’s announcement signifies that we’re on our way to achieving both.”

Construction of the 130,000 square-foot facility is slated to begin no later than Q2 of 2016 and is expected to be completed in 2017. Mark Peterson, president and CEO of Greater Rochester Enterprise, commented, “STAMP, the site of this expansion, is strategically located between Buffalo and Rochester, which enables 1366 Technologies to draw on the highly-skilled and talented workforce available in our region.

"1366 Technologies’ decision to expand its operations here not only marks the largest business attraction success story in our organization’s history, but it also brings two great cities even closer together, strengthening our efforts to make Upstate New York a hot-bed for high-tech development.“