Laser surgery set to benefit from window to the brain 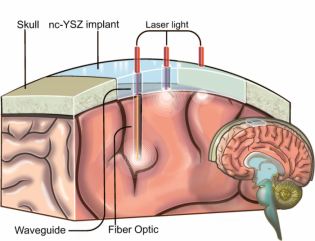 Laser-based surgeries and therapies show promise for treatment of several neurological disorders, but getting the laser light deep enough into the brain to do the most good has always been a problem.

The answer takes the form of a transparent skull implant, made from yttria-stabilized zirconia (YSZ). Previous attempts at transparent implants have been unable to combine the necessary optical properties with sufficient toughness for the job; but YSZ could fit the bill.

A suitable "window" into the brain is potentially a preferable alternative to repeated and highly invasive craniotomies, requiring the removal of a portion of the skull by surgical means.

The five-year project to develop the material - an effort christened Synthesis of Optical Materials for Bioapplications: Research, Education, Recruitment and Outreach (SOMBRERO) - first spotted the advantages of YSZ two years ago, but was awarded a total of $5 million earlier this month from a combination of funding sources to support further development.

Project leaders Guillermo Aguilar of UC Riverside's Bourns College of Engineering and Santiago Camacho-Lopez from CICESE believe that nothing similar to this kind of transparent implant designed specifically to facilitate laser surgery has been developed before.

"There are FDA-approved polymeric materials like poly-ether-ether-ketone (PEEK) and poly-ether-ketone-ketone (PEKK) which are sometimes used following human craniotomies, but they do not provide the optical transparency that our window does," he commented.

"At the laboratory level for animal models, most researchers use glass to gain transparency, although they are then limited by the extent to which they can leave the implant in place for chronic studies."

YSZ is itself already FDA-approved as a biocompatible material, used for dental implants and hip joints; but it is normally opaque. Changing that in order to control the implant's optical properties and ensure transparency at the wavelengths of interest in laser surgery required the SOMBRERO team to pay close attention to the manufacturing process.

"What makes our material unique is a process that allows us to start from a fine powder and render it transparent by maintaining the nanostructure of the native material, tightly controlling the pressure and temperature variation rates during a densification operation," said Aguilar.

Immediate candidates
The resulting transparency covers the visible spectrum and the near-IR, although Aguilar foresees taking advantage of the material's optical properties in many ways. One example might be using it not just for the transmission of light into the brain for diagnostic and therapeutic purposes, but also to allow for the collection of returning light for continuous in vivo imaging.

"We also envision the possibility of manufacturing a unique photonic material that may allow us to control the properties of light delivered across the implant, through laser post-processing techniques," he added. "This could be a means to improve established diagnostic methods, such as optical coherence tomography and others."

Waveguides embedded in the implant could help to direct and control the propagation through the material in desired ways, while lengths of fiber optic structures beneath it might deliver light further below the surface of the brain.

The SOMBRERO program aligns with current education policy initiatives in the US and Mexico, such as President Obama's BRAIN initiative and other programs aimed at partnerships among institutions in the two countries.

According to UCR, the majority of the most recent funding - $3.6 million - comes from the National Science Foundation’s Partnerships in International Research and Education (PIRE) program, pairing US universities with others around the world. An additional $1 million will come from Consejo Nacional de Ciencia y Tecnología (CONACYT), Mexico's entity in charge of promoting scientific and technological activities. The remainder of the money will come from in-kind contributions from the Mexican universities.

To date, the new implant has been assessed in a pilot feasibility study using animal models, so human clinical trials may still be some way off. But the potential benefits of laser surgery techniques facilitated by such a transparent window could prove to be significant.

"Our colleague and collaborator Dr. Devin Binder, a neurosurgeon and neuroscientist at UCR, has helped us identify at least four or five immediate candidates for an improved implant like this," commented Aguilar. "They include traumatic brain injury and spinal cord injury, brain tumors, stroke, and neural pathologies that require deep brain stimulation, such as epilepsy."