Trove of data made available by the Environment Agency should also prove useful for archaeology, civil engineering and more. 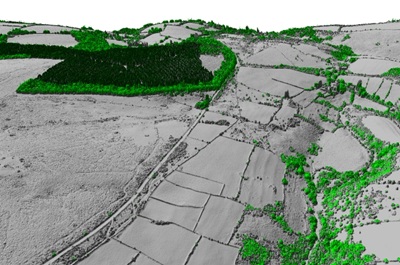 The UK’s Environment Agency has made an 11 Terabyte collection of light detection and ranging (LIDAR) data freely available, with owners of vineyards in England expected to be among the first to benefit.

Released as part of the UK government’s open data policy, the LIDAR sets have been collected over the past 17 years through laser-based mapping surveys.

It is hoped that free access to the data will stimulate new ideas and applications for the laser-produced information, for example by supporting “precision viticulture”.

Chalky terroir
Although it cannot match the Champagne region of France for history and prestige, the south-facing slopes of southern England are formed from a similarly chalky terroir, and in recent years the local vineyards have gained a growing reputation for their production of sparkling wines.

According to Environment Agency chairman Sir Philip Dilley, the LIDAR data provides unique information about a landscape that could particularly useful to wineries. “For example, when deciding where best to plant vines, the data can provide a vital insight into the terrain to identify ‘frost hollows’ and badly drained areas that adversely affect vines,” he said.

And although English wine production remains tiny compared with that of continental Europe and other sunnier climes, the agency points out that the area of planted vineyards in the country has more than doubled over the past decade, and now covers some 4500 acres.

It suggests that an additional 75,000 acres in England are thought to be suitable for growing high-quality vines – an area equivalent to the entire Champagne region. Armed with downloadable the LIDAR database, anybody considering a venture into viticulture should be readily able to assess the best options.

Hiking to Minecraft
Aside from growing grapes, the composite LIDAR data - available at resolutions down to just 25 cm - is also expected to prove useful for archaeology, civil engineering, and other, more surprising, applications.

“Our surveys are helping to find Bronze Age burial mounds in Monmouthshire and Roman roads in Cheshire,” says the Environment Agency. “Minecraft players have requested our LIDAR data to help them build virtual worlds: the data could be useful to anyone creating realistic 3D worlds.”

Other uses could see slope data provided to hikers and walkers via smart phone apps, while woodlands could be managed more efficiently by providing a simpler and faster way to count and measure the height of trees.

• The LIDAR data can currently be downloaded here, with the Environment Agency saying that all 11 Terabytes will eventually be available via its new “open LIDAR” portal under an Open Government Licence.