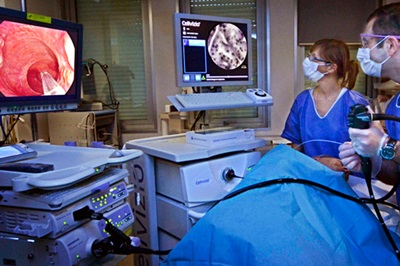 Paris-based Mauna Kea Technologies says that its “Cellvizio” optical biopsy technology has been cleared by the US Food & Drug Administration (FDA) for use during certain surgical procedures.

The 510(k) clearance comes at a critical time for the French company: it recently announced a change in commercialization strategy that will see it look to partner with larger companies interested in integrating Cellvizio inside their own products.

That change in approach was announced shortly before Mauna Kea revealed a sharp drop in sales during its latest financial quarter and an attempt to cut the cost of marketing and selling Cellvizio.

Following the FDA decision, Mauna Kea’s CEO Sacha Loiseau said: “This is a historic regulatory and business milestone for Mauna Kea Technologies that will have a strong impact on the value of our proprietary endomicroscopy technology.”

He added: “This is the first clearance for this technology in surgery in the US, making it possible for surgeries to be performed with real-time visualization of tissues at the microscopic level, enabling a new level of precision and confirmation for surgeons.”

Optical biopsy
The confocal laser endomicroscope developed by Mauna Kea is often referred to as an “optical biopsy”, capable of diagnosing or determining the extent of certain cancerous tissues in real time and without the need for removing and analyzing sections of tissue in the traditional manner.

Although the technology has already been cleared for diagnostic applications in more than 40 countries, Mauna Kea says that the latest FDA ruling means that Cellvizio could now be used during “millions” of cancer surgery procedures that take place in the US each year.

Earlier this year it gained CE mark approval for minimally invasive surgery in Europe, while a recent study by a team from Imperial College, London, found positive results for the probe when used during breast cancer procedures. Another clinical team in Cologne, Germany, said that it had found the technology useful in neurosurgery to remove brain tumors.

According to the firm, its “Celioflex” probe can be delivered with an endoscope or laparoscope and manipulated by surgeons using standard hand-held instruments. “With precise real-time visualization of tissue during surgery, surgeons may be better able to confirm the absence or presence of metastasis that may not be visible using pre-operative imaging,” Mauna Kea said.

The approach could also identify the extent of tumor margins and evaluate appropriate responses to treatment, while in resection surgery the optical biopsy could enable better definition of safety margins and improve surgical planning. “Pathologists could also benefit from improved frozen section sampling by better targeting of malignant lesions,” claims the firm.

Commercialization strategies
But for all its diagnostic and surgical potential, Mauna Kea has struggled to convert Cellvizio’s utility into a profitable business. The Euronext-listed company posted an annual net loss of nearly €14 million on revenues of only €12.3 million in 2014, and sales have slipped back sharply this year.

The company did raise €4.7 million via a private placement in May this year, and has since made significant cuts to its sales and marketing operation in a bid to reduce operating costs.

And shortly before revealing that sales in the first nine months of 2015 had dropped 24 per cent on the equivalent 2014 figure, Mauna Kea revealed that it was changing its commercialization strategy to focus on partnerships.

Acknowledging that the existing sales model lacked the scale to produce consistent commercial results, the firm said it was “actively developing” partnerships in the areas of interventional endoscopy, surgical oncology and interventional radiology.

The switch in sales models should be aided by both the recent FDA approval and the appointment of Florian Kemmerich as COO. Kemmerich has previously worked at Olympus and Karl Storz – two key players in the endoscopy market.