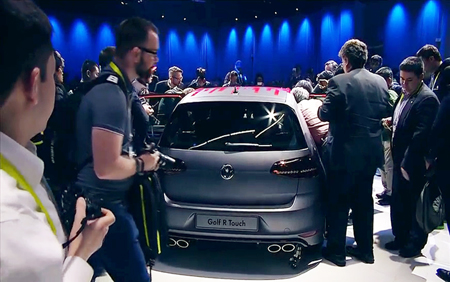 At this year’s International CES, in Las Vegas, NV, USA, several of the world’s major automotive manufacturers have been showing off a range of photonics-related enhancements to cars.

Invariably, these developments are claimed to improve driving experience – whether by human gesture interaction for routing and vehicle management, semi-autonomous driving, laser and OLED-based lighting or integrated camera systems that improve control and safety.

Ford announced that it is “using innovation not only to create advanced new vehicles but also to help change the way the world moves.” The so-called Ford Smart Mobility plan is to use innovation to take driving to “the next level” in connectivity, mobility, autonomous vehicles, customer experience and use of big data. 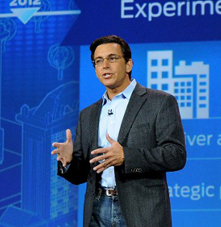 Ford President and CEO Mark Fields commented, “Even as we showcase connected cars and share our plans for autonomous vehicles, we are here at CES with a higher purpose. We are driving innovation in every part of our business to be both a product and mobility company.”

The company said that a fully autonomous Ford Fusion Hybrid research vehicle is now undergoing road testing. The vehicle uses the same semi-autonomous technology in Ford vehicles on the road today, while adding four LiDAR sensors to generate a real-time 3D map of the surrounding environment. The vehicle can sense objects around it using the LiDAR sensors, and uses advanced algorithms to help it learn to predict where vehicles and pedestrians might move. 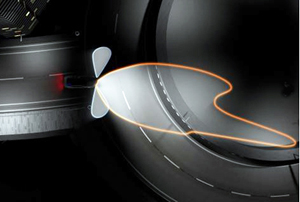 BMW presented a concept vehicle that showcased what the company calls “lighting innovations we expect in the future”. BMW‘s Laserlight technology, which made its production car debut in the BMW i8 model, illuminates the road at a significantly improved range and intensity. At up to 600m, the range is more than twice that of conventional headlights. At this year’s CES, BMW Laserlight was presented as an “intelligent” lighting system because it is now integrated with cameras, sensors and driver assistance systems.

Laserlight works with the navigation system to illuminate corners in advance of arrival, while a laser-based “Dynamic Light Spot” can provide early warning of people or animals at night from a distance of up to 100m. Inside the Laserlight headlights, coherent, monochromatic blue light is converted into white light; a special optics directs the rays onto a phosphor plate inside the lighting unit, which converts the beam into white light that is similar to natural daylight.

The latest BMW lighting system can “in pitch dark conditions” detect people and animals from a distance of up to 100m, by infrared camera, and then “spotlight” them with the laser-based Dynamic Light Spot. This is achieved a longer range than that of any other system, BMW claims. Also, if the vehicle detects reduced clear road width ahead, the laser headlight system can be used to provide “narrow clearance” lighting. 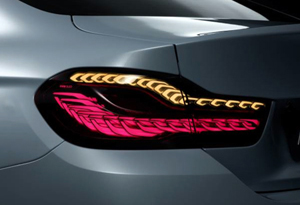 BMW first presented a rear light cluster with OLED elements on the BMW Vision Future Luxury concept model, which made its world debut in Beijing in April 2014. BMW M4 Concept Iconic Lights is now displays its own version of this design.

At CES 2015, the company said its M-style OLED rear light cluster “marks a new evolution of the typical BMW L-shaped lighting design, which, with the BMW 7 Series launch, was reinforced with a distinctive glowing effect”. BMW said it will launch a production model featuring OLED technology in the near future.

Volkswagen, which has been a notable player in the development of more connected, more intelligent vehicles, at this year’s CES demonstrated a fleet of vehicles that show how much the car and computer are already intertwined. VW’s main focus is on four aspects: computer-controlled drive systems; app and smartphone integration; intuitive vehicle operation; and autonomous and semi-autonomous driving, the last two of which are particularly enabled by photnics-based technologies.

The latest infotainment systems by Volkswagen detect the approach of a hand with proximity sensors. In its next stage of development — which Volkswagen showed in Las Vegas with its new Golf R Touch concept vehicle — an infotainment unit uses cameras to not only detect hand gestures, but “understand and assign meaning to them”, the company said. 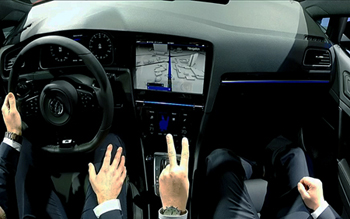 This advanced type of recognition makes it possible to control displays and functionality without the use of a touchscreen. The technology, says VW, “adds comfort and convenience to human-vehicle interaction by reducing driver distractions while operating controls, and further underscores the synchronized relationship between the car and the computer.”

Along with many other automotive developers, VW feels that the cars of the future will need to be able to drive autonomously when necessary – “a change that will be introduced step by step”. Today’s Park Assist by Volkswagen enables semi-automated entry and exit from parking spaces. The car executes the entire steering process for the parking maneuver independently.

At CES 2015, Volkswagen demonstrated another evolutionary stage of Park Assist called Trained Parking. Here, the car scans a frequently driven path to a parking space via camera, and from that point on it executes the path semi-automatically by computer control. In another evolutionary stage, it will be possible to have the car parked by the driver remotely, using a smartphone to control the car.