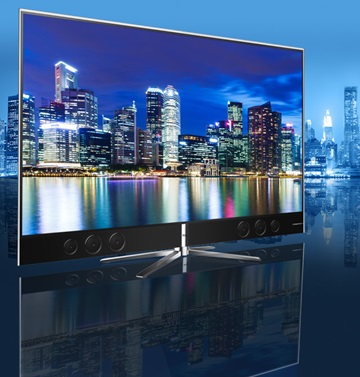 Optical films incorporating fluorescent quantum-dot nanoparticles have appeared in new LCD TVs and monitors from several leading brands at the Consumer Electronics Show (CES) in Las Vegas, suggesting that demand for the materials is set to grow rapidly.

Samsung, LG and China-based TCL all announced LCD TVs featuring the technology, touted as a low-cost way to improve color reproduction, while Philips and AOC, another Chinese producer, showed off 27-inch monitors.

The idea behind the quantum dot films is to improve the color saturation of lower-end LCDs based on LED backlights, thereby delivering the kind of image quality more typically associated with plasma and organic LED screens but at a much lower cost.

Rather than being the source of the light itself – as is the case with quantum-dot laser diode structures – the technology being used in the new displays is relatively simple, with the nanocrystals effectively acting as a phosphor to convert blue light into the full range of colors produced by the display.

TCL said that its new 55-inch LCD TV, which features quantum dots developed by Massachusetts-based QD Vision, would now be launched outside of China. It was first released in TCL’s domestic market late last year.

According to the firm, its addition of QD Vision’s “Color IQ” technology means that the new H9700 QLED model can deliver 110% of full-gamut NTSC color performance. “Until now, most mainstream LCD TV designs delivered 60-70% of the NTSC color gamut standard,” reckons the Chinese company. “Working together, TCL and QD Vision have delivered a state-of-the-art television with full-gamut color at LCD TV prices.”

Not to be outdone, CES keynoter Samsung touted its new “ultra-high definition” LCD TVs, also based on nanocrystal-enhanced colors, while LG trumpeted the arrival of its 4K “ULTRA HD” LCD TV incorporating quantum dots ranging between 2 nm and 10 nm in diameter – the smaller dots producing the shorter-wavelength colors.

Impending QD proliferation
All are following in the footsteps of Sony, which has been incorporating QD Vision’s quantum dots in its TVs for more than a year, while handheld devices such as Amazon’s latest Kindle Fire HDX also use the nanocrystal approach.

Further evidence for the impending proliferation of quantum-dot technology for displays was provided by MIT spin-out QD Vision’s announcement that it had raised “significant” new funding to meet what it described as surging demand for its Color IQ-branded quantum dots.

“The new funding will help accelerate the growth of the company, particularly by expanding sales and marketing operations in China – the global center of TV manufacturing and consumption,” QD Vision said.

Although it did not disclose exactly how much additional cash had been raised, or its source, the company did add that former Lenovo CEO Steve Ward had just been appointed as its new executive chairman.

“QD Vision is a clear technology leader in an exciting new category that is about to explode,” said Ward in a company statement. Earlier backers of QD Vision have included In-Q-Tel, the venture wing of the US Central Intelligence Agency (CIA). 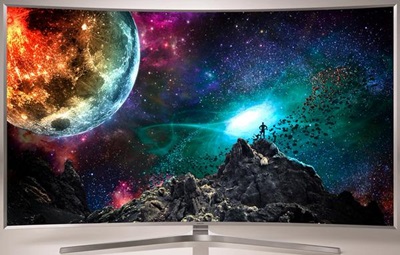 Mass production imminent
However, QD Vision is not the only company looking to benefit from a production scale-up of the color-enhancing materials. Back in 2013, chemicals giant Dow Electronic Materials signed an exclusive licensing deal to make and sell quantum dots developed by UK-headquartered Nanoco Technologies, and has recently begun construction of what it says will be the world’s first large-scale manufacturing plant for cadmium-free quantum dots in Cheonan, Korea.

Those materials are set to appear in Dow’s own “Trevista” branded products for electronic display applications.

In December, Nanoco said that it had signed a manufacturing contract with Dow, and that commercial production of the quantum dots should begin in the first half of 2015.

That announcement came shortly after Nanoco revealed that LG’s CES-launched 4K ULTRA HD TV would be using its quantum dot technology, while it is also working closely with Osram on general lighting applications.

Founded in 2001, Nanoco has since developed a molecular seeding process suitable for making quantum dots on an industrial scale. “This process not only allows the company to produce on a large scale, it also offers precise control over the particle size,” states the firm on its web site.

The approach also contrasts with the alternative method of making quantum dots, known as “high temperature dual injection”, which Nanoco says is more difficult to scale up.

Another major industrial player involved is 3M, which has been collaborating with venture-backed Nanosys on cadmium-free quantum dots. California-based Nanosys has itself partnered with Samsung for the past four years, and the two announced a new multi-year agreement at CES 2015 that covers both display and lighting applications.

They quoted Jennifer Colegrove, an analyst at Touch Display Research, who sees huge market potential for the new technology. "This is one of the biggest breakthrough technologies for LCD in the last several years," she said. "We forecast the quantum dot display and lighting component market will reach $9.6 billion by 2023."