Toshiba to show off new glasses-free 3D display at CES 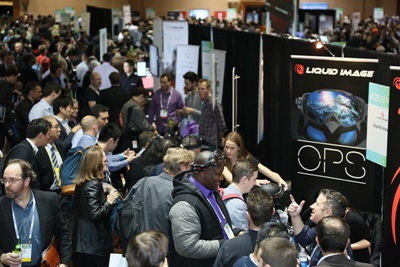 Toshiba is hoping to re-invigorate interest in 3D displays early next year with the unveiling of a new optics technology that it says will bring glasses-free 3D viewing to portable devices.

The 15-inch screen, said to be capable of switching between high-definition 3D mode and ultrahigh-definition (4K) in 2D mode, will be shown off at the forthcoming Consumer Electronics Show (CES) event that opens in Las Vegas January 6.

According to Toshiba, the GRIN lens, whose refractive index distribution can be altered with the application of a voltage, suffers no degradation in image brightness in 3D mode and no deterioration of image quality in 2D mode. Those familiar with 3D displays will be familiar with both the much lower brightness and flickering effects experienced when wearing the active glasses used to watch 3D broadcasts.

Medical applications
Toshiba explains that the new GRIN lens system reduces the abnormal alignment of liquid crystal molecules near the boundaries of the liquid crystal lens. That reduces crosstalk to 2 per cent, compared with 5 per cent in conventional 3D displays.

“By combining this technology with a 15-inch 4K LCD panel (3840 x 2160 pixels), 3D resolution has been increased more than fivefold, making it possible to view high-quality 3D images on the same display used for ultrahigh-definition 2D images.”

It is not the first time that Toshiba has developed and marketed glasses-free 3D displays – the company pioneered the technology for televisions and laptop computers, as well as specialist products for the professional users. That resulted in the world’s first glasses-free 3D display for medical applications.

As an example, the company's "REGZA GL1" series of TVs, launched at the CES show in 2011, used an optical system and algorithm to create nine parallax images from the LCD panel. In those products, light emission and direction is controlled from the center, right, and left of the screen to realize a wide viewing angle.

However, achieving the level of performance required for professional applications has typically relied on relatively expensive specialized plastic lenses, and the new development looks set to help Toshiba target these markets with a more cost-effective approach.

“Toshiba plans to fuse the new technology with a partial 2D/3D switching function which can be applied to any screen size and position, and to aim for its rapid commercialization in business-to-business industrial and medical products that require glasses-free high-definition 3D displays,” announced the firm.