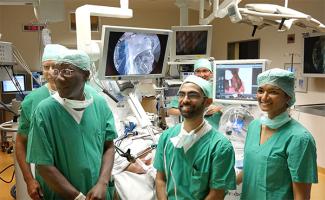 Less than two months after it was first used in a cancer procedure, the Medrobotics Flex surgical platform has completed a further demonstration of its capabilities.

In July 2014 the system was used to remove lesions from two patients at the Ear, Nose and Throat Clinic of University Hospital Essen, said by the company to represent the world's first robotic-assisted cancer surgeries.

Now the platform has been employed in an education context, again in Germany, during the removal of a lesion from a patient's throat as part of the 15th International Laser Course and 3rd Course on Transoral Robotic Surgery at the University Hospital of Giessen and Marburg, before an audience of attending surgeons.

Flex was CE-mark approved for sale in the European Union in March 2014, but the system is not yet approved for use in the US.

In April 2014 the Massachusetts-based company closed a funding round worth $26 million, with the funds intended to support the commercial launch of the system in Europe and an anticipated launch in America. The trials in Germany indicate that the platform's profile on the Continent is now set to rise further.

"The Flex System is the first robot-assisted flexible endoscopic platform for use during surgical procedures," said Samuel Straface, president and CEO of Medrobotics, speaking after the Essen procedure. "It extends the capability of surgeons to look and reach around corners and operate in confined spaces."

Flex is based around an articulated probe, able to reach lesions in locations that may be problematic to access for more rigid instruments. As a result the surgical procedure can be considerably less invasive; advantageous for the patient and potentially of financial benefit to hospitals.

Seeing clearly
One key factor in robotic surgery platforms is the imaging system incorporated into the surgical endoscope, which allows the surgeon to see what's happening and make accurate cuts in precisely the right place.

According to Medrobotics, the camera system incorporated into the tip of the Flex instrument employs a near-high-definition CMOS camera and LED lamps, for high-quality visualization of the site of interest. The camera can be moved from side-to-side and up-and-down within its housing, and transmits an image to external monitors for the surgeon to observe.

• Another robotic-surgery developer recently announced improvements to the viewing capabilities of its platform. Intuitive Surgical of California has received FDA clearance for its Firefly fluorescence imaging technology, which will now ship as part of the company's flagship da Vinci Xi system.

The da Vinci platform is designed to carry out major procedures on the heart and other organs, as well as cancer surgeries.

The issue of blood obscuring the surgeon's view is a potential challenge in all robotic surgery procedures, but Firefly is said to allow surgeons to locate the source of any blood leakage without resorting to more complex surgical instruments. Used in conjunction with an injectable fluorescent dye, it allows tissue with blood flow to be highlighted in a green color for surgeons, while tissue without blood flow appears gray.

Switching between standard, visible light and near-infrared imaging during minimally invasive procedures allows a more accurate determination of the position of blood vessels in the vicinity of the site of interest than is otherwise possible, according to Intuitive Surgical.