UK program is looking to make fiber laser welding permissible under the strict codes of the nuclear industry. 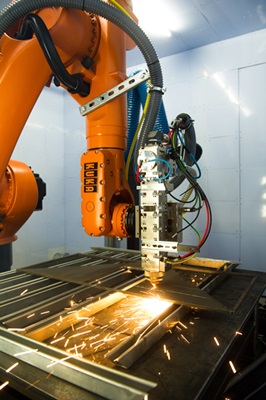 by Andy Extance
Any plan to build new nuclear power plants can expect to come under extreme scrutiny, usually on two key fronts: cost and safety. With the UK set to spend around £60 billion on a new generation of reactors, it is understandably keen to minimize the ammunition for such attacks.

Among those measures is a five-year research program called New Nuclear Manufacturing (NNUMAN), charged with developing techniques to maximize productivity and safety. And included in its themes is an approach previously unused in the construction of currently operational nuclear plants: high-power laser welding.

“High-power laser technology wasn’t available when most of the existing civil nuclear power plants were built,” underlines Lin Li, who researches laser engineering at the University of Manchester. “Thus the manufacturing codes used were mainly based on traditional technologies.”

Li heads up a team addressing the welding theme within NNUMAN, with the overall project led by Manchester with support from the University of Sheffield. He stresses that laser welding technology has not been reported specifically for nuclear grade ferritic materials, like class SA508 steel:

“Laser welding is not yet permitted for thick section nuclear fabrication,” he told optics.org. “Therefore, our findings would be of a pioneering nature in this respect.”

NNUMAN launched in October 2012 with £4 million funding from the UK Engineering and Physical Sciences Research Council (EPSRC), matched by the two universities. It also benefits from close industrial links, providing practical and further financial support to help the technologies investigated transition from the lab to production-readiness.

“Our work is guided by an advisory board of industrialists and academics, comprising many international nuclear suppliers and research organizations,” Li said.

16kW fiber laser
The engineer explains that, thanks to advances with fiber lasers, laser welding is now a potential option for the nuclear industry. “They enable the highest average optical powers – up to 100 kW – to be delivered over optical fibers for remote operation.”

Crucially, conventional CO2 laser beams cannot be delivered in this way. Fiber lasers are also more energy efficient, with a typical electro-optical conversion rate of 25-35 per cent, compared with only 10-15 per cent for CO2 lasers. “In addition, beam absorption by metallic materials is also better for the shorter wavelength fiber lasers compared with longer wavelength CO2 lasers,” said Li.

As such, NNUMAN exploits a 16 kW IPG Photonics system, which is one of the highest-powered fiber laser systems in the UK. It is coupled to a six-axis Kuka robot with a Precitec welding head attached, and mounted on a dual-axis turn/tilt table.

Li’s team uses this setup to weld test pieces that model nuclear reactor components such as vessels, pipes and valves with a minimum of distortion and heat input, and maximum weld integrity.

“The specific requirements which need to be evidenced for joining materials in nuclear power plant components include being of extremely high quality and integrity, as well as delivering long service life,” Li explained.

“We aim to weld 80-130 mm thick ferritic steels such as SA508 and stainless steels up to 80 mm thick with high integrity and low residual stresses,” he added. The team is also comparing autogenous welding, where a filler material is not used in the join, with filler-based methods like wire feeding. 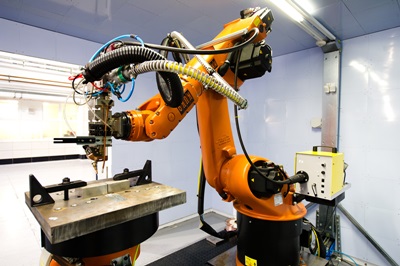 Sizing up the challenge

Going commercial
Although NNUMAN’s first year was focused on building the capabilities needed for the project – the expertise, equipment and facilities – Li’s team has already made steps towards these goals. “We have demonstrated welding of 30 mm thick ferritic steels with a combination of single-pass autogenous and multi-pass wire feed within a narrow weld gap, and stainless steels of 20 mm thick,” Li said. “These are showing promise for extension of the techniques to higher thickness. The heat input using these techniques measures less than 10 per cent compared with arc welding.”

Along with laser welding and narrow-gap arc welding, electron beam welding is the other joining method being studied by the NNUMAN team. The most promising approaches will then proceed to market by being passed on to another key element of the UK’s nuclear strategy, the Nuclear Advanced Manufacturing Research Centre (AMRC).

Laser welding must therefore demonstrate its capabilities on thick-section metals by April 2015. “Detailed materials and microstructural analysis, together with mechanical properties, residual stresses and radiation environmental testing, will follow,” Li explained. “As the results from these tests emerge the process of transferring the technology to AMRC and industry partners will commence, estimated to be in 2016.”

And while there is no guarantee that the UK’s new nuclear plants will use laser welding, Li is confident the technology has what it takes:

“Laser welding has to demonstrate its long-term integrity and economic benefits for it to be introduced into the manufacture of major nuclear power plant components, via amendments to industry design codes,” he emphasized. “However, we believe that our technology will show sufficient benefits for it to be considered for future nuclear power plant component manufacture, both in the UK and elsewhere.”