Imaging of blood flow reveals effects of drug use 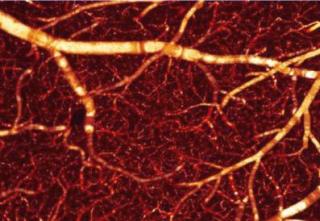 Imaging techniques that can reveal the direct effects of drugs on blood flow in the brain are a key to understanding the physiological underpinnings of drug abuse, and hence a potential route to superior treatments.

Optical coherence Doppler tomography (ODT) is one promising answer, able to deliver quantitative visual information about the behavior of blood vessels, and provide valuable functional data about what happens to them under different stimuli and conditions.

Researchers at Stony Brook University, New York, and the National Institutes of Health have now used the technique to image the effect of cocaine on cerebral blood flow in a mouse, and in the process tackled some of the technique's inherent functional weaknesses. The work was published in Biomedical Optics Express.

The ODT principle, developed many years ago, involves an analogous approach to that employed in standard optical coherence tomography (OCT) with the addition of aspects from a second technique, laser Doppler flowmetry (LDT). In LDT, laser light is scattered by the red blood cells moving in their capillaries and vessels, and the motion reveals itself as a Doppler shift.

The combination can produce high-resolution tomographic images of static and moving elements in a blood vessel simultaneously; and, crucially, combines that high resolution with a better field of view (FOV) than other methods provide.

"High resolution and large FOV is always a trade-off," commented Yingtian Pan of Stony Brook University to Optics.org. "So far, for the study of flow velocity changes made in response to factors such as functional stimulation of the brain, ODT is a unique modality able to combine these two main advantages together."

This makes ODT compare favorably with competitor techniques such as two-photon laser scanning microscopy, which can reach a comparable FOV when imaging fluorescence-labeled vasculatures, but is limited to quantified flow rates in a few capillaries each time - less helpful for functional study.

Even so, ODT has some inherent challenges of its own. Its dynamic range is limited, since it examines the phase difference between two adjacent scans; too great a phase difference beyond an inherent maximum value leads to "phase wrapping" artifacts in the visualized blood flow.

Another hurdle is that the reported velocity is angle-coupled, and when the vessel's direction happens to be near-perpendicular to the incident beam, the measured values can be extremely slow. Results from some particular veins and arteries of interest in the brain, called the pial vessels, are always underestimated.

"Our main goal was to solve these two main problems," commented Pan.

Absolute velocities
The dynamic range was improved with a phase summation algorithm, developed to preserve the parabolic profile of fast flow and avoid phase wrapping artifacts, without sacrificing the system's sensitivity to slow flow in a capillary.

Meanwhile the orientation problem was tackled by continuously measuring the Doppler angle - the angle at which the incident beam intercepts the moving blood cells - and decoupling it from the detected result, to give an absolute cerebral blood flow velocity (CBFv).

Earlier approaches to solving these issues have involved considerably more complexity. Interpolating images acquired at different scanning rates is known to work but presents technical difficulties, while the use of multiple beams in multiple set-ups is not necessarily effective with the high NA optics needed to ensure the best lateral resolution in ODT.

"Continuously tracing the Doppler angle of vessels with respect to the incident light beam was one of the challenges we faced," said Pan. "Previously we used multiple point detection, by which the angle is roughly estimated for three to four points on the vessel; but this method is not very accurate. So instead we used image-processing techniques to retrieve the skeleton of the blood vessel, and smoothed it by a curve-fitting algorithm, allowing us to trace the gradient along the entire vessel."

An accurate idea of the blood vessel's path allows the Doppler angle to be decoupled more effectively, and hence leads to more accurate velocity readings - but to date on relatively simple vessels. Correcting the full field in 3D with huge numbers of vessels and flows, and developing the computer processing to do it, will be the team's coming battle.

Drug damage
Acute cocaine uptake may lead to the shut down of small capillaries in the brain, while long-term abuse can cause permanent vascular damage. The team used mice as an animal model to determine how effective ODT could be at spotting these and other drug-related changes.

It found that CBFv dramatically decreased after 30 days continuous cocaine administration, as some vessels started to constrict and some others shut down altogether. At the capillary level, flow velocity become extremely slow - so much so that it could hardly be detected by ODT, suggesting a severe shortage of blood supply and consequent poor delivery of oxygen to the brain cells.

"Owing to ODT’s high spatial resolution and large FOV, we are able to visualize for the first time the heterogeneous CBFv change in response to acute and chronic cocaine administration," commented Pan. "This would not have been possible using traditional imaging modalities such as fMRI or PET, which fail to differentiate individual vessels. And importantly, it is a track-free approach without any injection of fluorescence dye, so potential artifacts arising from drug interactions are avoided."

The primary hurdle for using the technique to image cerebral blood flow in larger animals, or even humans, is its imaging depth of less than 2 mm, a limitation determined by the brain tissue's scattering properties and shared with its OCT cousin.

But even though ODT cannot image deep down into the brain, it still shows translational potential for real-time imaging of surface blood supply during neural surgery. And as Pan commented, there are still many potentially rewarding research questions to chew over in the lab.

"Quantification of heterogeneous CBFv is of great importance in both clinical application and research. Recently we are interested in longitudinal study of the mouse model, examining how exactly the vessels become constricted. This could have significance for disease prognoses, and for any medical approaches that could release vasoconstriction."

There are also implications beyond drug abuse, for studying conditions that hinge on the growth of new blood vessels - most obviously cancer.

"Anti-angiogenesis approaches, preventing the creation of new vessels, is considered a promising route for cancer treatment," Pan noted. "ODT allows us to longitudinally visualize the influence of anti-angiogenesis treatments, such as the use of photo-thrombosis to terminate a tumor's blood supply."