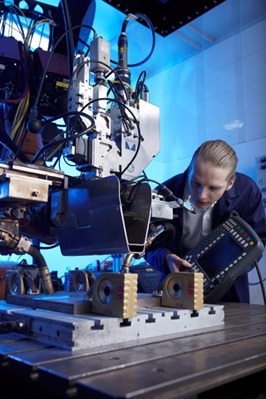 Using a 16 kW disk laser combined with gas-metal arc welding (GMAW), the team at the highly regarded center for industrial laser applications claims it was able to weld thick metal samples and sheets made of either aluminum alloys or steel up to 12 times faster than conventional GMAW.

That believe that, once fully developed, the approach could shorten processing times dramatically, and reduce the cost producing liquid gas tanks and pipelines.

The scientists, who work in LZH’s group specializing in joining and cutting of metals, claim that the hybrid process produced single-sided, zero-defect welds with aluminum sheets up to 12 mm thick, and steel up to 23 mm thick.

“The innovative process is not only extremely fast,” announced LZH. “In comparison to conventional methods with multiple layer GMAW processes, the seam geometry is very narrow and filler material consumption is considerably lower.”

The 12 mm-thick sheets, made of the aluminum alloy EN AW 6082 T6, reached the highest evaluation group for welding seam impurities, according to typical standards measures.

The hybrid technique incorporates a scanner mirror that can switch the laser beam length-wise or cross-wise to the feed direction, and can bridge gaps of up to 0.5 mm and edge misalignment of up to 2 mm. “The engineers have also been able to weld steel sheets with a thickness up to 23 mm at a speed of 1.5 meters per minute for single-layer welds,” says LZH. 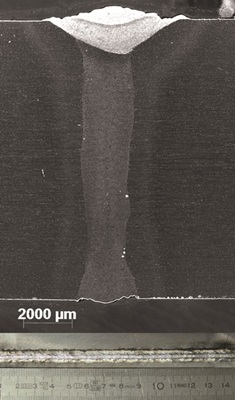 Faster welding
Using GMAW to join steel sheets with a thickness of 30 mm requires a so-called “tack weld” and around six filler layers. In comparison, the hybrid approach only needs two to three filler layers, of which the first is produced using the laser-GMAW combination.

This step also replaces the tack weld and the first four layers of the conventional GMAW weld. After that initial step, the sheets are subject to one or two additional runs with just the GMAW process. It means that the hybrid approach can weld a component with a length of 1.5 meters in just one minute, whereas conventional GMAW would require twelve minutes.

The key advantages of hybrid welding come from a synergy between the arc of the GMAW and the laser. LZH explains that, when combined, the laser is coupled into the melt pool of the filler material generated by the GMAW process.

This filler material is melted by the arc, and while molten it absorbs laser energy that is then transferred to the weld area between the sheets. “The laser beam and the arc process stabilize each other, making relatively high welding speeds for arc processes possible and for high gap widths,” says the development institute.

The results are part of the “HYBRILAS” project, one of several related to laser materials processing that have been backed by Germany’s Federal Ministry of Education and Research (BMBF).

The goal was to develop a hybrid welding approach for fault-tolerant, one-sided welding of heavy steel (defined as thicker than 20 mm) and aluminum (defined as up to 15 mm thick) plates.

“The possibilities of this new manufacturing method are the welding of thicker plates in one welding operation, as well as a considerable degree of freedom in construction,” LZH explained. “Further goals are the reduction of production time and filler material.”

However, the hybrid approach is not the only option for heavy industrial applications in what can be extremely harsh environments – fiber laser firm IPG Photonics has previously said that a customer in Russia used one of its systems for pipeline welding.

According to a HYBRILAS project background note, the next steps in the process development should see a maximum plate thickness for the new technique determined, before development of an operating welding head suitable for serial production and the construction of a pilot plant.