Use of iSTAR platform in criminal trial proves benefits of new approach to 360-degree images and video. 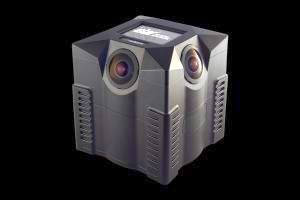 A new system for capturing 360-degree spherical images and high-resolution panoramic video has proven its worth by being used in a UK murder trial for the first time.

Developers NCTech, based in Edinburgh, expects that its iSTAR platform could now be taken up for use in other civil, security and military sectors, with consumer applications ultimately to follow.

The acceptance of iSTAR's panoramic images of a crime scene for use during a recent UK Crown Court trial was described as a landmark moment by Neil Tocher, CTO of NCTech.

"iSTAR has been designed as a high-end ruggedized product for use in demanding markets," he commented. "This use of the technology has shown how high-resolution 360-degree imaging can assist the emergency services in challenging situations."

Entirely UK-designed and built, iSTAR employs four separate optical units to capture a full scene, between them delivering an effective image resolution of 50 MP. Once captured, the visual information is processed and combined into panoramic still images or video by the platform's application software, Immersive Studio, also designed by NCTech.

Critical alignment
The development of iSTAR and its specialized optics enabled Tocher and his partner Cameron Ure to build upon previous experience in the technology of panoramic imaging. "In determining our approach, we deliberately tried to pick off as many of the disadvantages of existing systems as possible," Tocher commented to Optics.org.

"We settled on using fixed-focus and fixed-aperture optics in a product with no moving parts to simplify the calibration process, essentially manufacturing each iSTAR as a bespoke camera machined from solid metal," said Tocher.

"Each lens captures 190 degrees of the scene's horizontal field of view. This allows us to throw away visual data from the edges of the field, where wider-angle lenses are prone to aberrations, and grab around 100 degrees from the center of the field from each lens to go towards the final composite."

The nature of 360-degree imaging requires a single nodal point with the lenses as close to that point as possible, in order to reduce parallax between the shots; a consideration which in turn made the size and positioning of the image sensors themselves equally critical. The four sensors at the heart of the iSTAR system each have a pixel pitch of 1.67 microns, and are arranged in a portrait, rather than landscape, fashion, reflecting the need for more vision capture over the vertical than the horizontal direction.

"The four sensors are positioned to an overall accuracy of two microns," noted Tocher. "Conventional placement of a sensor on its PCB substrate is not accurate enough for us, as a soldering process introduces too much positional error. So rather than aiming to align the PCB with our lenses, we instead align the active sensor surface itself, grafting the surface in the area where we know we will ultimately be throwing away the data. Our software then takes care of any remaining misalignment."

When creating a panoramic image, the system first takes multiple pictures at a lower resolution to analyze the scene and assess the dynamic range involved. It then fires each of the four optical systems nine times, to grab the ultimate visual data. Capture time is typically four to six seconds for a full panorama, with the optical system as a whole operating at what Tocher noted was towards the highest end of its theoretical capabilities.

A digital world
Tocher's background in the field includes work on Apple's QuickTime VR panoramic image format, and a successful period supplying a more straightforward panoramic image capture system to the real estate sector, until the crash in the UK's property market dealt a heavy blow.

"We came out of that deciding to make a high-end camera for more secure markets, such as security and military sectors, where there was clearly room for improvement in the systems being used to create panoramic images at the time," he commented.

One outside force playing a part has turned out to be Google, which introduced its Street View technology and concentrated the minds of many developers on just what uses high-quality high-resolution panoramic visual information might be turned to.

"You will see a flurry of activity in other sectors, including consumer products, now that Google has educated the market," commented Tocher, noting that the US search engine giant had essentially recreated work done by NCTech's forerunners with less user-friendly kit some years ago. "A Street View system costs more than £100,000 and requires a car to transport it; our system is £4,000 for the basic system, and designed with a straightforward automatic one-touch interface."

The current iSTAR family includes models able to capture 360-degree video or still images in visible light or in infra-red, a portfolio likely to appeal to several market sectors. Other complementary imaging techniques might also ultimately benefit, with laser-scanning being potentially a prime example.

London's Metropolitan Police recently described the use of a Faro laser scanning system to capture crime scenes and the aftermaths of traffic accidents. NCTech's system could allow the incorporation of pictorial data from iSTAR directly into the laser-scan information, counteracting the sometimes problematic lack of color data recorded by a normal laser scanning process. Such a mapping has until now been difficult, but NCTech has developed software able to fit the two sets of data together and turn a laser scan into a perfect image, using raw data straight from the iSTAR image sensors.

"When we initially started thinking about how to take 360-degree panoramas for the property sector, the technology and its implications were too advanced for the application; it was too much too soon," concluded Tocher. "Now the world is being oriented towards digital documentation and digital asset management, and our technology is a perfect fit."