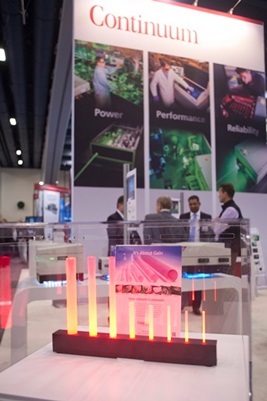 The Amplitude group, which until now has specialized in ultrafast lasers, says that upon completion of the deal, it will have launched into a “transformative” growth phase, offering a much wider range of products and a comprehensive global presence.

GSI, whose own transformation is resulting in a much stronger focus on medical and machine vision technologies, announced that it had found a buyer for the Continuum business back in March – and that it had signed the agreement on January 31.

GSI’s latest filing with the US Securities & Exchange Commission confirms the sale price for Continuum’s assets and liabilities as only $7 million in cash, even though the business unit contributed around $25 million in sales to GSI’s turnover in the parent company’s latest fiscal year and moved to a new state-of-the-art 52,000 square foot facility near San Jose, California, as recently as February.

Amplitude says that following a phase of integration, it will add 70 employees to its roster, with total headcount growing to 270. The company’s turnover should also increase to $84 million, alongside a much more diversified foundation and a more substantial presence for global distribution.

It also told optics.org that the Continuum brand will be retained, along with the division's subsidiaries in Japan, Germany and France. Continuum currently employs more than 50 people - including 20 PhD-level employees - in San Jose, and another 20 around the world.

In a statement, Amplitude – based near Bordeaux and part of the local Routes des Lasers cluster – said: “This acquisition will allow Amplitude Technologies to serve a more diverse customer base, with a well-differentiated product mix that will sustain growth for years to come. The combined portfolio of products and services will allow the joint companies to more efficiently meet demands in the laser marketplace.”

Science focus: Apollon laser
Gilles Riboulet, the CEO of Amplitude Technologies - which makes ultra-high-energy Ti:sapphire sources - added: “We look forward to working together more closely to expand our offering of photonic solutions and leverage the strong brands that both teams have established. This combination further advances our mission to provide high-performance laser systems for a variety of applications to customers around the world.”

Whereas sister company Amplitude Systèmes has made a name for itself in the field of ultrafast fiber lasers, collecting a number of awards in the process, Continuum is also known for its high-energy solid state sources for "big" science.

In 2012, the GSI subsidiary won a $4.8 million contract to provide the French National Center for Scientific Research (CNRS) with a 400 Joule amplifier section for the giant Apollon laser project, a 10 petawatt femtosecond source due to be completed in 2015. It is seen as something of a forerunner to the suite of Extreme Light Infrastructure (ELI) projects now under way in eastern Europe. Amplitude is also involved in Apollon.

Eric Mottay, who heads up Amplitude Systèmes, said of the Continuum deal: "The recognized excellence of Continuum, and its location at the heart of the Silicon Valley in a brand new industrial facility, will strengthen our support capability to our growing base of industrial, medical and scientific customers.”

Larry Cramer, general manager at Continuum, added: “I believe this combination will enhance our product development capabilities and brings us into partnership with a technology leader that is focused on scientific lasers.”

According to other SEC filings from GSI, Continuum’s sales declined from $35 million in 2011 to $25 million in 2013. At the end of last year, the scientific laser division’s total assets and liabilities were estimated at around $14 million and $4 million, respectively.