Go-ahead for next stage of SBIRS missile warning system 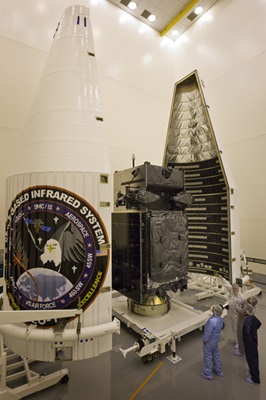 SBIRS satellites: GEO-1 prior to launch

The US Air Force has awarded Lockheed Martin’s Space Systems division a $1.9 billion contract to build two more satellites that will form part of the space-based infrared system (SBIRS) designed to give early warning of ballistic missile launches.

Announced June 24 in the Pentagon’s daily round-up of contract awards, the contract should see the fifth and sixth geosynchronous Earth orbit (GEO) satellites completed by September 2022.

“This contract modification will complete the production of the SBIRS GEO 5/6 satellites, which was started with the procurement of long lead parts, and also complete the associated ground operations and processing updates,” read the Pentagon’s release. “The contract modification also includes adding options for acoustic testing, launch vehicle integration, launch and early on-orbit testing, and contractor operations support. Work will be performed at Sunnyvale, California, and is expected to be completed by September 30, 2022.”

Exhaust detection
One of the largest and most complex missions currently being worked on by the US military-industrial sector, SBIRS has been hit by severe budget overruns since work on the project began.

The system is designed to quickly identify ballistic missile launches by detecting the infrared radiation generated by the hot exhaust that they produce. Through a network of both geosynchronous and orbiting satellites, the intention is to have complete global coverage.

Each GEO satellite features what Lockheed Martin and key sub-contractor Northrop Grumman describe as a three-color infrared payload, using Schmidt telescopes with dual optical pointing for both scanning and fixed, or “staring”, surveillance.

Jeff Smith, VP of Lockheed Martin’s “overhead persistent infrared” mission area, highlighted the need to find a suitable compromise between cost and performance. In the company’s statement, he said: “SBIRS provides capabilities critical to our nation’s defense but we also understand in today’s environment that we need to find that perfect balance between capability and affordability.

“This contract is the third part of a thoughtful acquisition strategy aimed at further reducing cost and cycle time for GEO-5 and GEO-6, while still providing exceptional data to the warfighter.”

The contract to build GEO-5 and GEO-6 follows the launch of GEO-1 in May 2011 and GEO-2 in March 2013, with GEO-3 said to be currently undergoing acoustic and thermal vacuum testing at Lockheed Martin’s Sunnyvale, California, satellite manufacturing facility and on schedule for delivery at the end of this year. GEO-4 recently entered final assembly, integration and test, adds the giant defense contractor.

GEO-1 GEO-2 were certified for operation in May and December 2013, respectively.