Low-cost multicolor source is designed to meet the specific needs of near-eye displays. 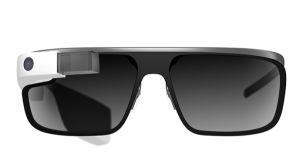 Smartglasses and other augmented reality devices, such as Google Glass and the upcoming Oculus Rift, project visual information into the wearer's field of view, and require some finely calibrated microprojection technology to get the job done.

Commercially available systems are currently built around LED light sources, commonly using either a small LED or OLED screen; or liquid crystal on silicon (LCOS) technology with a LED light source. But these may not prove to be the best solution.

EpiCrystals, the Finland-based supplier of projection technology for small-scale applications such as head-up-displays and cell phones, believes that a customized laser source it has developed can overcome some of the disadvantages inherent in LED implementations. Applications in industrial and military head-up displays could ultimately benefit, alongside high-volume consumer products.

"There is no other company working on a RGB laser light source platform similar to this," commented Tomi Jouhti of EpiCrystals, which has started shipping pre-production samples to partners and customers.

"In any current LED-based or laser diode projection system there are issues with the achievable contrast ratio," said Jouhti, attributing the problem to the behavior of diodes at different driving currents. "Visible-light diodes all emit visible spontaneous light when the driving current is increased from zero to the lasing threshold current. At that lasing threshold stimulated emission enters the game as well, and at full power almost all the output is from stimulated emission."

In a laser-beam-scanning projector, the driving current will be somewhere between the threshold current and full power at any given instant, depending on the requirements of the image in question. This means that visible spontaneous emission may well still be present, with detrimental results for the contrast and purity of the image.

Stimulated emission only
EpiCrystals' system is built around a nonlinear crystal of the company's own patented design, delivering RGB output colors via frequency conversion but suppressing visible spontaneous emission from the output to leave only the stimulated emission. The result is enhanced contrast and removal of false-color blocks or artifacts from the picture.

"Light from an infrared pump laser is guided through the nonlinear crystal and converted to red, green or blue - our standard colors are 465 nm, 532 nm and 620 nm," noted Jouhti. "The lasing threshold current for the visible light is designed to be beyond the lasing threshold for infrared light, so there is no visible spontaneous light disturbing the image quality."

The particular needs of smartglasses impose some strict requirements on the laser source, which EpiCrystals has taken care to address. The RGB module is compact, occupying less than 0.15 cm3, and the operating voltage of the system has been kept low; the company claims it to be the world's only RGB light source with an operating voltage below 2 volts.

Operating temperature is another key factor for wearable devices. EpiCrystals points to proprietary phase-matching technology in the source designed to allow a broad operating temperature range of more than 40°C, which it contrasts with the need to control conventional frequency-converted lasers within much stricter limits.

Other advantages include a suppression of speckle in the final image, said to be an inherent result of the system architecture. Plus the embedded 930 nm IR laser could be employed for eye-tracking and interactivity, without adding an extra laser, by harnessing some of the IR output which does not become converted to visible light.

"The challenge has been to develop a multicolor laser light source with the optical and electrical properties optimized for projection displays, while still keeping the manufacturing costs low," commented Jouhti. "We believe no one else has made a frequency-converted RGB laser light source module where all lasers are in one package and which is optimized for low output powers in these applications: below 1 mW for near-to-eye uses and and 50 mW for head-up-displays."

The source may also prove suitable for a different approach to the central idea, by allowing the visual information to be projected into the eye instead of onto a screen. "It is usable for see-through near-the-eye applications, but could also allow retina-scanning displays, where an image is drawn directly onto the retina, because of its ultra-low-power RGB output," noted Jouhti.