Infrared camera maker's new iPhone-compatible hardware, which it hopes will revolutionize the thermal imaging sector, to begin shipping next month. 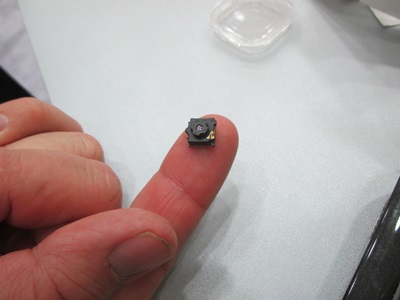 by Ford Burkhart in Baltimore
Many demos were selling an app, but not FLIR Systems. Its reps have no idea what you would do with the amazing $349 FLIR ONE pocket camera, a first for thermal imaging. An energy audit, check a row of solar panels, or hand them out to firefighters to use in poor visibility? Who knows.

New this year, it’s a product taking the place of items that would have sold for as much as $25,000 just a few years ago. The first shipments will go out in June, FLIR said on Monday at its demonstration booth at SPIE’s DSS 2014 show in Baltimore.

The key is Lepton, a thermal imaging core the size of just half-a-fingernail. Inside its housing, it snaps onto an iPhone case. From there, FLIR hopes users, especially teenagers, with simply play with it, reinvent it, put it to work or to something else involving a thermal image plus a visible-range image, displaying either or both.

In the thermal images, cold shows up as dark blue or purple colors, while heat shows as orange or red. Apps developers have been alerted to the development since January, with FLIR getting ready to start volume shipments in June. 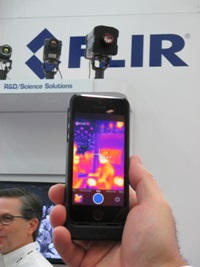 FLIR ONE in action

“How to get it into mainstream consumer hands? Use a smart device…that’s what Lepton is about,” he said. The sensor resembles the old “button cam” of the 1960s, suggesting top-secret uses. But what does Jarvis think will be the killer app for this latest incarnation of thermal imaging?

“The market will reinvent what thermal is,” Jarvis said. “Nobody here knows what that app is. Let everybody go play with it.”

FLIR says that the buzz around the FLIR ONE has been loud; a spokesman points out that the firm had received some 15,000 requests for additional information before the DSS 2014 exhibition opened its doors.