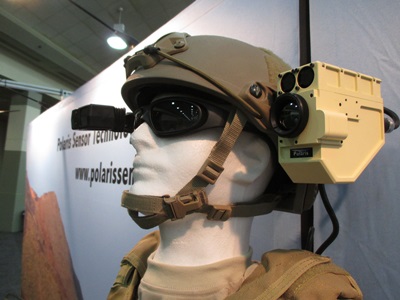 His company’s product, called eTherm for “enhanced thermal”, is better at seeing at night, better at spotting a potential intruder behind a bush, or to see camouflaged targets.

An extra advantage, he points out, is that eTherm does not require temperature differences to create an image. “We can form the image from the material itself, from its texture and shape,” Chenault says.

In one image, Chenault showed a hillside in New Mexico with many distant, dark bushes in a standard thermal image. “I challenge you to pick out which dark object is a vehicle,” he said during a conference presentation on Monday (9074-2) at the “Infrastructure Protection and Counter Terrorism Systems and Technologies” session. Nobody could. Then, the image with polarized light revealed not just the vehicle but many of its details. “It’s highly unlikely you would ever see it in standard thermal imagery alone.”

“With maritime applications, it works very well,” Chenault claimed. “Water is highly polarizing.” He showed a thermal image that barely revealed a boat. An eTherm image showed the boat more clearly, as well as a person standing on board. “It could help protect a port of entry to a harbor.”

He also showed urban night scenes including a parking lot where vehicles were all but invisible without the eTherm view. The polarized signature, Chenault said, aids in segmentation of features in the field, with a significant increase in contrast. In one scene, an unmanned aerial vehicle (UAV), unseen in a thermal image, showed up clearly against a cloud.