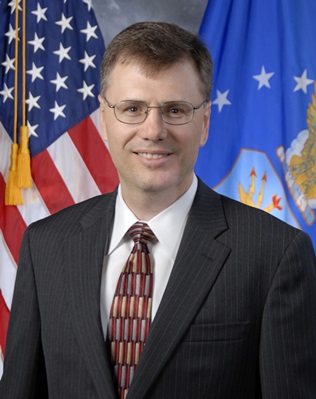 by Ford Burkhart in Baltimore
A top official from the US Air Force gave SPIE DSS 2014 attendees a sobering assessment of the national security outlook for space because of an increasingly crowded and space-junk-strewn set of orbits.

Troy E. Meink, Deputy Under Secretary of the Air Force for Space, addressed around 800 people in a plenary talk entitled “Hard on Earth, Harder in Space.” He gave the presentation at the Baltimore Convention Center in Maryland.

Space debris is showing up in increasing amounts, he told them, the result of spent rocket bodies and various parts that have escaped into orbit over the years. Some 22,000 objects have now been tracked, many of them capable of a destructive act.

Meink asked if his listeners had seen the recent movie “Gravity”, in which a space shuttle piloted by George Clooney's character Matt Kowalski is destroyed by space debris. A few hands went up. “Our models warn us of a much larger number of space junk objects. We suspect there are over 100,000 objects that could damage or destroy one of our satellites,” he warned.

The best way to deal with all that junk, he said, was simply to let the debris slow down until gravity finally pulls it back to Earth. “The easiest way is just to wait,” he said. To try to “capture stuff in high-value orbits, that’s all very expensive,” he added. “It’s still a pretty big sky.”

However, the potential threat has not yet resulted in any major action. “We worry about it, but not to the level of being willing to invest the amount of money it will take to lower the risk,” Meink admitted.

Sensor network
Meanwhile, Washington DC is trying to take steps to reduce the amount of additional space junk being generated. “We have requirements that we try to de-orbit satellites before they die," he said. "We try to mitigate the amount of rubble that comes off when we fire our pilots. We’re not going to get down the stuff that’s up there, but we can try to lower the amount of what’s being put up.”

One action that the US and its allies are working on is a network of sensors – both around the globe and in orbit – that can help to answer the fundamental questions: “What’s up there? Who put it up there? And what is it doing?” Meink said that Washington would share its data with satellite owners to avoid problems, and collisions.

The big problem is the sheer volume of space to monitor - a trillion cubic miles. “Building optical systems to track things there is a very big deal,” Meink said. The farther away, the more difficult radar gets, so the US approach will rely on optical telescopes and low-light cameras for deeper space.

Part of the difficulty, and one of the reasons why there is so much debris left over from conventional rocket launches, is the risk-averse nature of the business. “Getting the technology from the laboratory and into the space environment is now a major challenge,” Meink said. “Although we really want to do that, new technology can be a source of consider economic uncertainties.”

“We have to lighten things up as much as possible, which drives the cost of the satellite up,” he added.

Another problem, said Meink, is that optics are the most expensive things that the US builds for space. “In the end we wind up paying by the pound. The lighter and more flexible it is, the more expensive. It’s very expensive to get something in orbit.”

Add to that the need to protect optical systems during the fierce vibration and rattling of a launch and then the harsh extremes of orbit, and the difficulties - and costs - mount up rapidly.

Space filling up
As each country pursues its own national interests, orbits are filling up. “More players are putting up more satellites,” Meink said, pointing out that 60 countries now have some kind of space agency, for weather, global positioning, Earth monitoring and other uses.

Meink highlighted the development of a new generation of optical systems that may help. DARPA, the Defense Advanced Research Projects Agency, is testing a new space surveillance telescope in New Mexico, for example.

And he suggested that perhaps, in the not-to-distant future, Google Earth may show real-time video from space.

A top priority, Meink told delegates, was to further develop laser communications in space. It’s been his goal for decades, he said, to provide a high-bandwidth, low-power service with optical links.

But while NASA recently took a step towards exactly that with the “LADEE” Moon mission, Meink said that this technology was proving more difficult than originally anticipated. “The goal line of success is continually moving as we develop this technology,” he said.

Asked whether the US military should pursue a less risk-averse model, Meink seemed open to the possibility:

“If the technology is a game changer,” he replied, “we are willing to take more risk.” For example, if a new mirror reduces weight by two thirds, “we will take more risks with that.”

“Failure can be extremely traumatic when it happens,” he added. “But the only way to push forward is to take more risks. Generally, the DoD pushes technology much harder than the commercial side. We must take more risk, but manage it and plan for bad things to happen. That’s not an excuse not to do it. In the end, we have to be a little more risk tolerant.”

“We are at a pivotal time in history,” he concluded, with a need to manage risks in what remains a very tight economic environment. The solutions, he suggested, would emerge from the basic research being done in the labs of the very DSS 2014 attendees listening to his presentation.