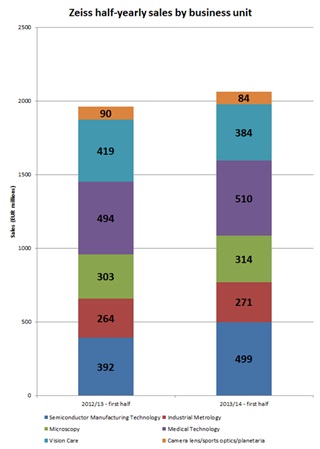 Historic optics company Zeiss has reported a 5 per cent increase in sales for the first six months of its 2013/14 fiscal year – thanks largely to returning demand from the semiconductor market.

The German firm’s semiconductor manufacturing technology business unit, which provides ultra-precise optical systems for lithography tools, posted sales of €499 million - up 27 per cent compared with the first half of last year.

Together with stronger sales for medical technology and industrial metrology applications, that offset lower sales of camera lenses and in the vision care sector, and drove Zeiss to total revenues of €2.07 billion for the period (first half of 2012/13: €1.98 billion).

At €2.25 billion, total incoming orders were 16 per cent higher than last year, again attributable primarily to semiconductor market, while earnings before interest and tax (EBIT) grew more than 50 per cent to €166 million despite some negative currency effects.

However, the positive developments in the semiconductor sector are not yet due to any significant momentum in extreme ultraviolet (EUV) lithography – an area where Zeiss says it is currently spending heavily on internal research and development but one which is beset by ongoing delays in the commercialization of new production-worthy scanners.

CEO Michael Kaschke said: "The chip manufacturers are sending clear signals to both ourselves and our strategic partner ASML that they see EUV as the production technology of the future, even if the volume production of microchips with EUV will happen later and more slowly than originally planned due to the complexity of this technology."

Overall, he is cautiously optimistic for the remainder of the financial year, despite an expected slowdown in emerging economies and little prospect of a beneficial change in terms of currency effects.

The CEO is still targeting a modest increase in sales and profits for the year as a whole, ahead of any major ramp in demand for EUV optics.