ESI goes back to the drawing board 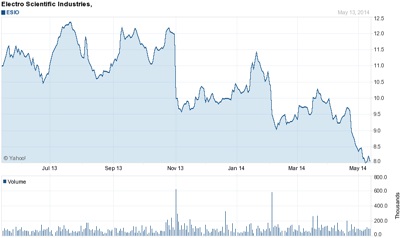 US-based laser micromachining company Electro Scientific Industries (ESI) has undergone a radical shake-up, in response to dwindling sales and what new CEO Ed Grady described as a failure to make its technologies appeal to a sufficiently broad range of applications.

The Oregon-based firm has just reported a sharp fall in sales for the fiscal year that ended March 29 – as it had warned last month.

Seasoned executive Grady, who replaced Nick Konidaris as CEO in February, told investors that the company was changing its structure, market approach, “go-to-market strategy” and execution in response to the slide in fortunes.

Acknowledging that strategic mistakes had been made, he said: “Several times in my career I’ve been asked to face difficult situations with a focus on turning a company around. I’ve done this successfully three times.

“Unfortunately, while there is a common learning and a common discovery, there is no one common solution. But there is common sense and logic that applies to achieving [the] desired results.”

Customer concentration
He specified some key challenges now facing ESI, including revenue volatility and uncertainty, a concentration of customers (a single customer accounted for 31 per cent of ESI’s fiscal 2014 revenues), low-cost competitors and slow growth in some applications served by the company.

Grady added: “We have been in the past enamored by technology and pursued both high market risk and high technology risk for new products, believing the technology could be a sustainable differentiator, as it was in the semiconductor business. We must acknowledge our failure to commercialize our technologies to a broader range of industries and applications.”

His new strategy will be based around laser systems designed and based on modular platforms, and using standard parts and subsystems. “Our configurable products will appeal to broader markets and take our technologies into multiple industries,” the CEO said.

Grady also wants to shift attention away from emerging markets and high-risk applications to target markets that are adjacent to those in which ESI has had success. “In the past, we have made large bets on emerging technologies and industry processes, only to discover that the applications did not emerge as we had expected and our market opportunity was smaller than we had hoped,” the CEO said in an investor call to discuss the latest results.

Laser leverage
That will require much better utilization of internal laser capability such as that provided by the acquisition of the French fiber laser start-up Eolite Systems, to create both product differentiation and a cost advantage at the system level – something that the company has so far struggled to achieve.

“Our acquired laser businesses possess compelling technology advantages, but we have been too slow in adopting them into our systems,” Grady admitted. “Our plan is to accelerate that adoption dramatically.”

In terms of the specific market sectors that ESI will now look to target, Grady highlighted applications in smart phone and tablet manufacturing, as well as the emerging field of wearable technologies and opportunities in the automotive sector.

But the CEO stressed that it would be some time before the turnaround efforts bore fruit in terms of profitable growth. Bookings in the latest quarter were well short of expectations and revenues in the June quarter are expected to fall sequentially to between $30 million and $35 million, generating more losses.