Longbow Research finds market growth to be modest but in line with expectations. 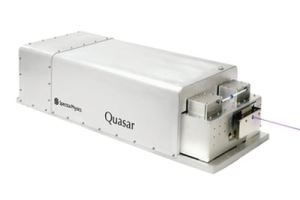 Pricing pressures and a varied international outlook are still facts of life for industrial laser vendors, but overall demand remained in line with expectations during the first quarter of 2014.

The regular survey of vendors carried out by Longbow Research pointed towards growth of mid-single-digits year-on-year in US demand, a slight pullback from the high single-digits recorded in the fourth quarter of 2013.

Demand was notably strong in low-power marking and engraving, a sector where end users found more uses for lasers of 50 W or less output power.

High-power 2D cutting markets did not fare so well, with growth slipping from the mid single-digits of Q4 2013 to only low single-digits in the new survey. Mark Douglass of Longbow attributed the change to a combination of adjusted demand ahead of possible adjustments to US tax treatments, and the bad weather of January and February.

Internationally, the outlook had improved modestly since the previous survey, with expectations now being for mid- to high single-digit growth, compared to the low single-digit or flat growth picture that persisted during the final quarter of last year.

The picture varied across geographic regions, however. Mid single-digit growth was reported for both China and Germany, but while that figure represented a rise in demand for the European industrial powerhouse, up from low single-digits in the previous quarter, the number from China was below the expectations of many observers.

The law of large numbers
A vendor with particular reasons to be cheerful was Newport, whose most recent financial reporting showed an order book boosted by the latest growth phase of the semiconductor equipment market, along with growth in life science and health applications.

The turnaround from a year ago, when the company disappointed analysts and saw its share price slide, is down to a number of issues, according to Douglass.

"One factor is that markets are simply better at present, but Newport also made a little bit of its own luck by winning new programs in semiconductors, and successfully launching a good laser product," he commented to Optics.org. "The Spectra-Physics Quasar has turned out to be its most successful product launch ever."

In the fiber laser sector, IPG continues to be the market leader, and earlier this year announced plans to ramp up its production of laser diodes still further. Longbow does not expect IPG to experience meaningful market share loss during 2014, with the company able to maintain its price advantage in the face of competition described by Douglass as relatively tame.

Even so, Longbow's analysis of IPG's position indicates that the vendor has some "high hurdles to clear," in order to maintain its traditionally bullish growth.

"IPG is running into the law of large numbers," said Douglass. "We see this in its Q2 2014 guidance, with growth only in the high single-digits at the midpoint. But also, given the economic uncertainty in Russia because of Ukraine and the massive capital flight out of the country, the question remains: who is going to buy the laser systems? It's not a matter of competition in my mind, but just market dynamics."

Although fiber lasers are set to continue making overall progress against CO2 systems in high-power applications, Longbow found that the rate of market-share gain had not accelerated during the quarter.

Douglass interprets the results are proving that the key obstacle remains low-cost diode pump lasers, with diode suppliers yet to crack the $10 per watt barrier. A lower price point of around $7-8 per watt would allow suppliers other than IPG and Trumpf to provide price-competitive lasers.

"While fiber lasers are still obviously gaining share, I just don't get the sense that the share gains are accelerating; not without another big step up in performance and/or a step down in price," Douglass commented. "It could accelerate slightly later in 2014, with the new cutting machine developments out of Amada and Trumpf allowing the cutting of thick steel at very high edge quality. But then again it may be hard to see if they just end up taking share from some of the other OEMs with fiber laser machines."