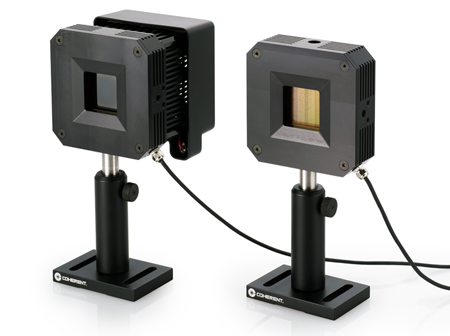 Claiming to have achieved "a significant technological advancement in laser power sensing", laser developer Coherent has launched a detector that combines the broad wavelength sensitivity, dynamic range and laser damage resistance of a thermopile with the response speed of a semiconductor photodiode

The detector relies on a novel, thin-film technology resulting in a device that can rapidly sense thermal changes due to incident laser energy.

Unlike conventional thermopile detectors, the company claims that with its PowerMax-Pro sensors (patent pending), heat flows vertically through a film, which is only a few microns thick, rather than radially to the edge of the device over a distance of several centimeters.

The company comments, "The result is a measurement response time below 10µs, as compared to over 1 second for traditional thermopiles. Moreover, these detectors can operate over a spectral range as broad as 300nm to 11µm, and incorporate a large 30x30mm active area."

The high response speed of PowerMax Pro sensors is particularly advantageous in commercial applications, where it enables CW laser power and pulsed laser energy to be sampled much more frequently, resulting in increased throughput and improved process control. And, their broad spectral response and large active area make these detectors useful with virtually all commercial, scientific, and medical lasers operating in the visible, near infrared and far infrared, including CO2 lasers at 10.6µm.

The PowerMax-Pro range is available in two coatings: a broadband coated model, which covers 300 nm to 11 µm; and a high damage threshold model (up to 14 kW/cm2), which covers both 300 to 1100nm and 9.5 to 11µm ranges. Both models span the power range of 50mW to 150W with a noise equivalent power of less than 5mW in water-cooled and fan-cooled configurations. The sensors can also be operated convectively with passive air cooling.