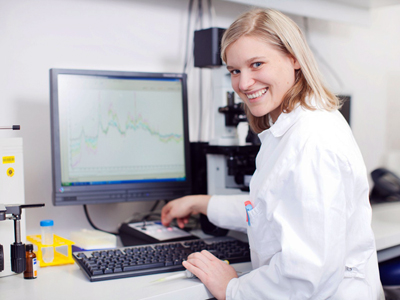 Prof. Katja Schenke-Layland from IGB with the system.

The Fraunhofer Institute for Interfacial Engineering and Biotechnology (IGB) in Stuttgart, Germany, has developed a technique to analyze living cells quickly and accurately based on Raman spectroscopy. The non-invasive optical procedure, which can identify the molecular fingerprint of different materials, has primarily been employed in quality control for medications and pharmaceutical substances.

Now biomedical researchers can also use this technology thanks to the research at IGB involving joint projects with universities, industrial partners, and the State of Baden-Württemberg. The tmethod is suited to investigating living cells without requiring invasive techniques or altering them with dyes.

In order to characterize stem cells or identify changes to tissues that are caused by tumors, inflammations, fungi, or bacteria, for example, it is now sufficient to determine the individual cells’ Raman spectrum – which is a specialized energy spectrum having particular analytical capability.

Prof. Katja Schenke-Layland from IGB commented, “We have developed comprehensive know-how in this area and have advanced the technology from use in pure research to industrial implementation. We can now investigate not just individual cells, but entire tissue structures and organs. Next we want to further refine the technology and develop more applications.”

Cell biologists at IGB use a specially developed Raman spectroscope jointly designed and built with physicists at the Fraunhofer Institute for Physical Measurement Techniques (IPM) in Freiburg. The device is compact and can be conveniently used to investigate a wide range of scientific problems. The scientists are accumulating the spectra they have recorded into a database.

Schenke-Layland added, “Each cell has a unique, unmistakable Raman spectrum. Doctors can compare the sample from their patients’ cells with our database and complete their diagnoses more quickly.” The technology is already being employed on a practical basis by industrial partners. The scientists are working at present on a rapid test for cancer diagnosis.

“Doctors using mobile Raman spectroscopes during an operation could unambiguously say whether a patient has cancer or not simply by comparing the cell sample with the data base.”

Conventional cancer diagnoses are still complicated and prolonged. After excising the tissue for biopsy, it first must be prepared for further analysis – for example by suitably sectioning or dying it to identify biomarkers. “But this always requires intervention in the specimen and manipulating it in some way,” she said.

There are numerous additional applications for this non-invasive optical technology – especially in regenerative medicine. Artificially-grown tissue may replace diseased cells in patients and thereby help the tissue to heal. To accomplish this, tissue-specific cells from bone marrow, for instance, must be removed and the stem cells extracted.

Bone marrow is made up of highly diverse cells and it is complicated to differentiate the adult stem cells from the ordinary tissue cells. In addition, the stem cells must be 100% correctly identified and separated. If this does not happen and other types of cells are cultured into the implant, the body may not react as hoped, causing implant rejection or tumor formation.

Raman spectroscopy is a process to unambiguously identify and differentiate various materials from one another. It is based on the interaction of electromagnetic radiation and matter. If matter is irradiated with light at a precisely defined frequency, some of the photons of this light interact with the molecules of the matter, which thereby shifts the photons’ own energy spectrum.