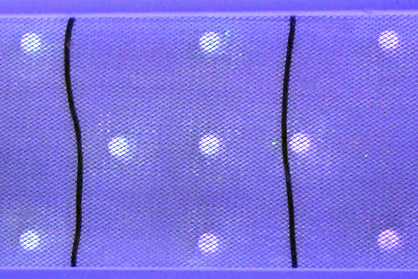 Many harmful substances in wastewater resist being broken down by biological waste water treatment plants. Researchers at the Fraunhofer Institute for Interfacial Engineering and Biotechnology (IGB) in Stuttgart, Germany, have developed a photochemical reaction system reliably treats water at high flow rates by UV light but without having to add chemical catalysts. The team last week presented an industrial prototype at the IFAT expo in Munich.

There are numerous contaminants in wastewater yet conventional treatment plants only remove a portion of these. In particular, bacteria commonly employed in the biological treatment stage in sewage works have no effect on persistent undesirable materials such as certain highly stable hydrocarbons present in some cleaning agent residues, pesticides and pharmacological substances.

Researchers at the Fraunhofer IGB and industrial partners are utilizing the "self-healing" power of water aided by photolysis (photochemical dissociation). The principle of photolysis is based on splitting water molecules using photons.The light sources in this system emit UV light exclusively in the region around 172nm, which comprises extremely energetic photons. As soon as these photons enter water, they split the H2O molecules, forming highly reactive hydroxyl radicals as a result.

Siegfried Egner, head of Physical Process Technology at IGB, explained, “These hydroxyl compounds have an even higher reaction potential than atomic oxygen. They are therefore able to decompose even very stable hydrocarbon compounds contained in harmful residues.”

There is a catch, however: this process takes place only in the immediate vicinity of the UV emitter – a rectangular, flat glass element that is positioned in the reactor vessel. When power is applied to the element, the hydroxyl radicals form a thin reactive boundary layer only about 50µm deep surrounding the external surface of the glass. In order to be sure no harmful material escapes untreated, the water must be controllably and verifiably directed through this boundary layer.

So the system developers have two parallel challenges: to make sure the entire contents of a batch are treated; and to be as certain as possible that every single hydroxyl radical formed is also used for a chemical reaction. This is because the extremely reactive hydroxyl radicals are extremely short-lived. If no “fresh” molecules are found to react with during this time interval, the energy of the hydroxyl radicals goes unused. The first industrial prototype, demonstrated at IFAT, has demonstrated a through-put of 2.5m3 of water per hour.

Egner added, “A certain amount of variation is normal, since the processing speed depends of course on the degree of contamination. To be sure the water is actually discharged only if its quality is impeccable, the unit is equipped with an additional safety mechanism.

"A sensor system is located at the discharge port that monitors the water for harmful substances. The water is discharged only once impurities falls below a maximum permitted value. The entire unit is fully automatic and programmable – for instance, it can be switched on and off depending on the electrical power rates available."