A research team spanning the Atlantic Ocean is trying to unlock the energy potential in water under a new €1 million project that began last year.

Comprising scientists at the Tyndall National Institute in Ireland and their partners in the US and Northern Ireland, the team is aiming to replicate photosynthetic energy generation using a combination of semiconductors and sunlight.

Dubbed “RENEW” (short for Research into Emerging Nanostructured Electrodes for the Splitting of Water), the effort is led by Tyndall’s Martyn Pemble and Paul Hurley, along with Paul McIntyre at Stanford University in California and Andrew Mills at Queen’s University Belfast.

They are the latest research team to try to imitate the way that leaves are able to generate energy by splitting water into hydrogen and oxygen.

Pemble said: “The main focus for the project is a tiny, stacked arrangement of [semiconductor] materials that is used for some transistors in the electronics industry. Previous work has shown that these structures can act as basic ‘artificial leaves’ for splitting water and the aim now is to make them more efficient.”

The project is part-funded – to the tune of $407,000 - by the US National Science Foundation (NSF). According to the NSF's project abstract, the RENEW team will look to replace expensive metals such as iridium or ruthenium used in photocatalysts with more Earth-abundant materials, in both single-junction and tandem photoelectrochemical cells.

They will also look to minimize the amount of the expensive material needed in the catalysts by using atomic layer deposition and nanostructuring techniques. 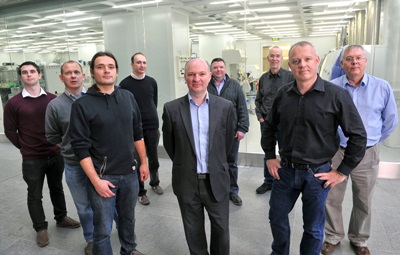 Storage potential
One avenue to be explored is the use of II-VI semiconductor absorbers in single-junction and tandem cells, along with corrosion-resistant photo-anodes and cathodes. “Possible applications of this research include grid-scale storage of solar energy and solar-driven synthesis of more complex and energy-dense hydrocarbon fuels, for which water oxidation is likely a required step,” states the NSF abstract.

Pemble says of earlier work by Stanford’s McIntyre: “[He] has shown that if you put the right metal on the surface of a silicon stack and provide light, then you can get it to oxidize water to give oxygen.”

“Then, on another electrode connected to it – perhaps a platinum wire – the electrons that we have gained can be used to reduce water, and this produces hydrogen,” he explained. “So it only requires the sunlight to fall on this stack of layers where the water oxidation takes place.”

While the basic idea of generating energy by redox splitting of water molecules is not a new one – groups in Spain and the US also claim to have made “leaf-like” semiconductor devices - other attempts to harvest hydrogen for fuel have either required the use of additional energy, or have been heavily reliant on the presence of ultraviolet light.

In contrast, the RENEW team says it will focus on using natural light and experiment with a range of semiconductors. Key to the process will be creating devices with an impenetrable barrier layer to withstand water’s corrosive effects, and it is this layer that will be produced using ALD.

Pemble summed up: “The ultimate goal is to combine our expertise to get to a point where you just drop the electrodes into water and when the sun comes out they would start to bubble away generating an unlimited, free and completely clean source of hydrogen, as well as oxygen.”

Having officially kicked off last September, RENEW is set to run for three years. As well as the NSF, it is backed by Science Foundation Ireland and the Department for Employment and Learning for Northern Ireland, under the US-Ireland Research and Development Partnership Program.

Other photonics-related projects funded via that US-Ireland partnership include a MEMS-based photoacoustic sensor to monitor greenhouse gas fluxes and growth of "nanopillared" laser structures on silicon.