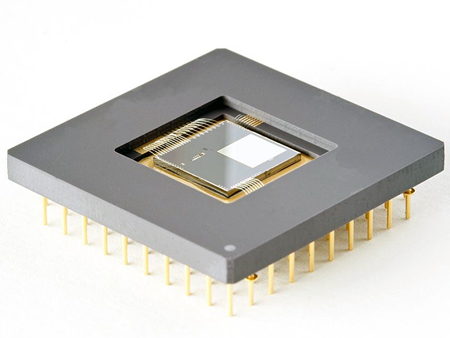 Researchers at the Fraunhofer Institute for Photonic Microsystems IPMS in Dresden, Germany, have developed a programmable microelectromechanical (MEMS) chip which can divert light of varying wavelengths at ultra-high speed and with micrometer-accuracy.

Installed in an optical microscope, this technology can be used to illuminate multiple targeted areas, which can be smaller than single cells and thereby stimulate specific light sensitive molecules as groups and is therefore applicable to genetic research.

In addition it is possible, by using a second such MEMS chip, not only to select specific areas precisely but also the angle at which these are illuminated. This technique can allow objects that appear as structures to be highlighted with even greater precision and to significantly reduce the many undesired environmental influences that can compromise such research.

A single MEMS chip consists of an array of over 65,000 separate micro mirrors which can each be tilted separately and virtually in a continuous way . By controlling the deflection of all mirrors it is possible to distribute the angle of incidence and the intensity of the light with up to 1,000 changes per second over the entire matrix area.

In order to test the benefits of this MEMS technology for use in optical microscopes, the Fraunhofer IPMS teamed up with optical system manufacturer In-Vision Digital Imaging Optics, of Vienna, Austria, and scientists of the Plateforme d'Imagerie Dynamique (PFID) at the Institut Pasteur, in Paris, France.

The aim of the French consortium’s leader is to apply this new combination of optics and genetics to influence the expression of individual genes in cells or organs of zebrafish embryos and fruit fly larvae. Such an intervention will make it possible to study the influence of specific genes on the development of organisms with far greater precision than before.

The MEMS system is also intended to be used to activate neurons by means of genetically-modified, light sensitive ion channels and thereby explore the function of individual neural networks in cerebral tissue.

The collaboration between Fraunhofer and the Institut Pasteur is being supported by the German Federal Ministry for Education and Research and the French National Research Agency within the framework of the Inter Carnot Fraunhofer Programme. A first demonstration of the system and the latest research results will now be presented to the public on the joint exhibition stand no. 224 at the SPIE Photonics Europe conference in Brussels running 14-17 April.