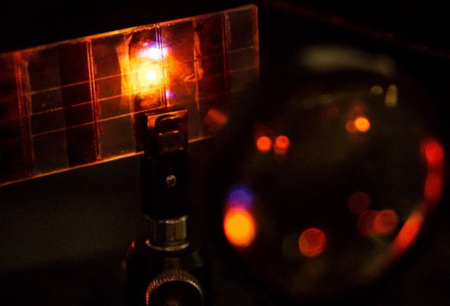 Night and day: a bright display for advertisements at night transformed into solar energy store by day.

Scientists at Singapore’s Nanyang Technological University (NTU) have developed what they are calling a “next-generation solar cell material” that can both emit light as well as convert it into electricity.

The solar cell is developed from perovskite, a form of calcium titanium oxide, which has recently been identified as a promising material that could hold the key to creating high-efficiency, inexpensive solar cells. The new cells not only glow when electricity passes through them, but they can also be customized to emit different colors.

This discovery, published this month in Nature Materials, was discovered almost by chance when NTU physicist Sum Tze Chien, from NTU’s School of Physical and Mathematical Sciences, asked his postdoctoral researcher Xing Guichuan to shine a laser on the new hybrid perovskite solar cell material they are developing.

Assistant Professor Sum said, to the team’s surprise, that the new perovskite solar cell glowed brightly when illuminated by a laser. NTU says this is “a significant finding” as most solar cell materials while relatively efficient light absorbers are generally not expected to generate light.

“In fact, this highly luminescent new perovskite material is also very suitable for the making of lasers. What we have discovered is that because it is a high quality material, and durable under light exposure, it can capture light particles and convert them to electricity, or vice versa. By tuning the composition of the material, we can make it emit a wide range of colors, which also makes it suitable as a light emitting device, such as flat screen displays.”

Research partner at NTU Nripan Mathews commented, “What we have now is a solar cell material that can be made semi-translucent. It can be used as tinted glass to replace current windows, yet it is able to generate electricity from sunlight. The fact that it can also emit light makes it useful for decoration or displays for buildings.” Mathews is also the Singapore R&D Director of the Singapore-Berkeley Research Initiative for Sustainable Energy (SinBeRISE) NRF CREATE program.

“Such a versatile yet low-cost material would be a boon for green buildings. Since we are already working on the scaling up of these materials for large-scale solar cells, it is pretty straightforward to modify the procedures to fabricate light-emitting devices as well. More significantly, the ability of this material to lase, has implications for on-chip electronic devices that source, detect and control light,” he said.

The advanced material, which is currently patent pending, is five times cheaper than current silicon-based solar cells. This is due to its relatively easy, solution-based manufacturing process, which works by combining two or more chemicals at room temperature.

The key points of the NTU’s development are highlighted in the Nature Materials abstract, which states: “Low-temperature solution-processed materials that show optical gain and can be embedded into a wide range of cavity resonators are attractive for the realization of on-chip coherent light sources. Organic semiconductors and colloidal quantum dots are considered the main candidates for this application.