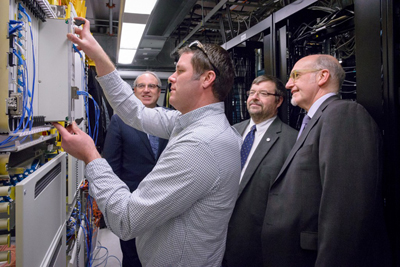 The ORION-Alcatel-Lucent team behind the 400G network test.

The Ontario Research and Innovation Optical Network (ORION), based in Toronto, Canada, has completed what its developers are calling the first North American field test of a high–capacity 400G network, which is dedicated to live research, education and innovation (RE&I) applications.

Last week’s test in Ontario marks the first time a dedicated research network in North America has completed a 400G trial. The test on the ORION network was conducted with Alcatel-Lucent between ORION’s Point of Presence (PoP) on Front Street in downtown Toronto and another PoP located inside York University’s campus in North York, Canada.

The scientists say that the results of the test demonstrate the ORION network is 400G capable, which could open up new opportunities for Ontario researchers, educators and innovators as they collaborate on local, national and international projects.

Marc-Anthony Bellini, CTO, Alcatel-Lucent Canada, added, “Along with this 400G capability comes more dynamic and efficient control of the network so it will evolve ahead of user demands and new network cloud architectures. It is rewarding to see how our product innovations and ORION’S network form the platform for others to innovate on a multiplied scale.” 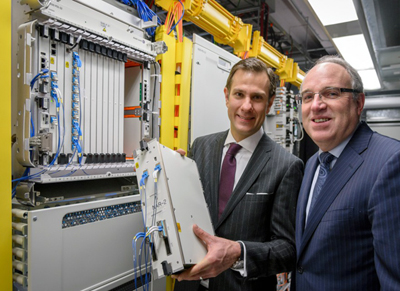 • Ontario researchers and neuroscientists are using “big data” in the Ontario Brain Institute’s Brain-CODE project, which involves transferring terabytes of genetic imaging and clinical data over the ORION network as they collaborate with one another.

• ORION’s fiber-optic network has 27 points of presence across Ontario with connections to other RE&I and carrier networks.

• The technology used in the 400G PSE was developed by Bell Labs, the research arm of Alcatel-Lucent.