While regulatory issues remain a challenge, nanoparticles could dramatically increase the effectiveness of the screening technique. 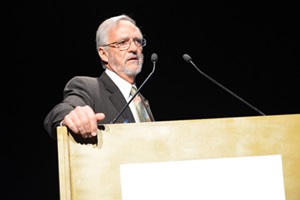 by Mike Hatcher in Brussels
Patients undergoing exploratory endoscopy procedures stand to benefit from more versatile and sensitive technologies in the future, thanks partly to the use of nanoparticles.

That was the message from Brian Wilson, a senior scientist at the Princess Margaret Cancer Centre in Toronto, Canada, in a “hot topic” plenary talk during the opening session of SPIE’s Photonics Europe conference in Brussels.

And while the cost of nanoparticles and regulatory issues surrounding their potential toxicity remain important, Wilson believes that improved diagnostic capability and a new “theranostic” combination of diagnostic and therapeutic use will emerge as two major applications.

Dedicating his talk to the biophotonics technology pioneer Britton Chance, Wilson described a multitude of ways in which conventional white-light endoscopy – limited in terms of its sensitivity and molecular specificity – could be improved.

This has already been tried without resorting to nanoparticles, for example using autofluorescence, Raman and optical coherence tomography (OCT) techniques, but while all offer certain advantages, they also have limitations.

For example tissue autofluorescence has poor specificity – a “false positive” can indicate a simple inflammation rather than cancer – and Raman techniques offer molecular specificity but can only be used with point-sampling and as such are impractical for exploratory scanning over large areas of tissue.

The potential benefits of endoscopies combined with nanoparticle probes include optical signal amplification, targeted detection of specific antibodies and the opportunity for multi-modal imaging.

SERS-based scope
One of Wilson’s current projects is to develop an endoscope based on surface-enhanced Raman scattering (SERS), an approach that amplifies Raman signals by thousands of times. The narrow-linewidth signals that it delivers also supports the use of multiple biomarkers – effectively multiplexing the diagnostic process.

What’s more, says Wilson, those signals produce quantitative information – critical for determining the stage and aggressiveness of any cancers that are detected and to indicate the best course of action for an individual patient.

“Cancers differ from patient to patient, and there is a tremendous variability in [their] genomic markers,” he told delegates. “We need to be able to determine the best personalized treatment.”

For Wilson, the three key words for cancer treatment are “detect, decide and destroy”. Another technological approach promises to combine those three elements in a single endoscopic procedure. Known as “theranostics”, it would use a light source to both detect and destroy cancerous tissue – for example by using porphyrin molecules to amplify the power of a laser targeted at a newly-identified tumor.

Organic advantage
Porphyrins would be one example of the type of organic nanoparticle that Wilson believes have a good chance of overcoming regulatory issues and wider public concern about the medical use of such nanotechnology.

Organic nanoparticles would also be far preferable from a cost perspective, he added.

As Wilson also noted, the basic idea behind endoscopy has been around for more than two centuries - ever since Philipp Bozzini’s experiments with candles back in 1805 – but the real game-changer was the development of optical fiber. Although much remains to be done, it seems possible that nanoparticles could bring about the most revolutionary change in endoscopy since then.

Mike Hatcher is the editor-in-chief of optics.org.