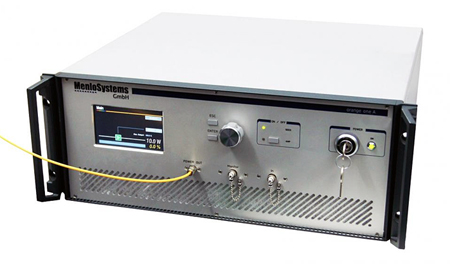 With an output power of 500mW, a pulse duration of 150fs and wavelength of 800nm, the new laser is a frequency-doubled, erbium-doped laser, which the developers say, will “meet the demands of potential industrial users”. The group’s next goal is to turn the prototype into a market-ready product.

Among other tasks, LZH was in charge of developing a ytterbium laser with a 1117nm wavelength. This laser serves as a pump laser for the new Raman laser that was also developed as part of the project. LZH said that one notable technical challenge was to minimize the losses in the Raman unit. The final result is a prototype with an output wavelength of 1480nm and an output power of 10W, which is used as the pump laser for the erbium short-pulse amplifier and was finally integrated into the entire system by the project coordinator Menlo Systems.

Ultrashort pulse lasers are particularly attractive for industrial applications because, due to their extremely short pulse lengths, these lasers can processes without damage almost any material, even biological tissue, in a highly precise, environmentally sound and cost-efficient way.

Many conventional industrial short-pulse laser processing systems are based on Ti:Sapphire solid-state lasers, which have the problem of being relatively large and expensive. This was the justification for the RASANT consortium’s development. The BMBF (Federal Ministry of Education & Research) project was funded through the ”KMU-innovativ: Optische Technologien“ (KMU stands for small to medium-sized enterprises in German) initiative, which started in May 2011 and was successfully completed in October 2013.

In the field of ultrafast lasers, erbium-doped fiber sources are superseding titanium-sapphire solid-state lasers in many applications. They are more compact, economical to produce and operate, although historically they have been associated with relatively low output powers. The RASANT project aimed to resolve this problem.

Ultrafast lasers based on erbium-doped fibers have in recent years made significant progress in the field of micro-processing. The technique known as cold ablation works with comparable accuracy to conventional engineering methods, often more cost-efficiently and with low environmental impact, especially if the associated optics split the laser beam so that large areas can be processed.

Another promising technique for such lasers is similar to 3D printing, but which works with greater precision thanks to the ultra-short pulses. With this method, 3D structures smaller than 100nm can be created, such as photonic crystals, the optical equivalent to electronic semiconductors. This procedure replaces a complex process, so again using the ultrafast pulsed lasers it can be cheaper and quicker. The rule of thumb is the more powerful the pulsed laser, the faster the structures can be created.