Current generated in an insulating material such as silica by the electric field of an intense and ultrashort laser pulse provides information about the precise waveform of the pulse that produced it. Visualizing the shape of light waves is a recent achievement of collaborative work by Ferenc Krausz of the Laboratory for Attosecond Physics at the Max-Planck-Institut für Quantenoptik and Mark Stockman and Vadym Apalkov, both from Georgia State University, Atlanta, Ga, USA.

The researchers say that their finding, which was recently published in Nature Photonics, represents the first step towards the realization of a detector that can visualize the shape of light waves, just as an oscilloscope can “reproduce” microwaves, for example.

This breakthrough means that attosecond technology is at least on course to extend the domain of electron metrology into the optical frequency range. The secientists state, “Our goal is to develop a chip that allows us to switch electric currents on and off at optical frequencies. This would increase rates of information processing by a factor of 100,000, and that is as fast as it gets.”

The published experiments are still in the realm of basic research. But the scientists have begun to breach the limits of conventional electronics and photonics, thus opening the route to a far more efficient, light-based, electronics. 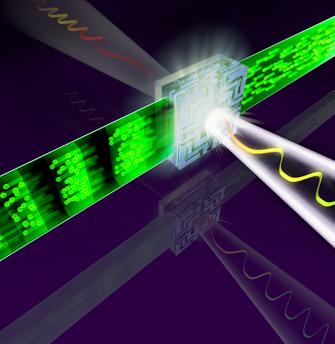 Electric currents (green) to be switched at lightwave frequencies?

The same issue of Nature Photonics also reviews observations by Krausz and Stockman that “light waves are showing the potential to boost the efficiency of conventional electronics by a factor of 100,000.”

In their scenario, the electric field of laser light would be exploited to control the flow of electrons in dielectric materials, which, in turn, could modulate transmitted light and switch current in electronic circuits at light frequencies. Visible light oscillates at frequencies of about 1015 Hz – opening the possibility of switching light or electric current at rates in this range.

Since both signals can also carry information, innovative optoelectronic technologies would enable a corresponding increase in the speed of data processing, opening a “new era” in information technology. The authors also review the novel tools and techniques of attosecond technology, which may play a crucial role in making the above advances happen.

The scientists are arguing that light is likely to become the tool of choice for controlling electric currents and data processing, saying: “After all, its electric field directs the behavior of electrons, which are the stuff of electric current and encode the information in our computer and communications networks. The ability to manipulate electrons with light would open up a new era by permitting switching rates of 1015 Hz, since light waves oscillate at frequencies of that order.”

To convert this vision into a reality will require “essentially perfect control” over the properties of light waves. The Nature Photonics article, Krausz and Stockman discuss their visionary concepts and point to possible ways of achieving this goal. Their ideas are based on initial theoretical and experimental investigations which suggest that the oscillating electric field of light may switch electric current and modulate light flowing in and transmitted/reflected by solid-state devices, respectively.

This type of interaction between optical fields and electrons, which provides the technical basis for the field of attosecond physics, has made it possible for the first time to observe the motions of electrons within atoms in real time, with the aid of attosecond light flashes.

It is possible to precisely mold the shape of attosecond flashes (how their intensity varies with time) provided “one has exquisite control over the behavior of the lasers that produce them”, the partners say. Krausz and Stockmann describe the techniques that have been developed to accomplish this feat. A more detailed history of attosecond physics is available on LAP’s homepage.