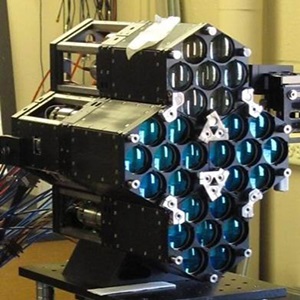 The US Defense Advanced Research Projects Agency (DARPA) says that a developmental laser weapon has precisely hit a target from 7 kilometres, thanks in large part to a 21-element optical phased array (OPA) that maintains good beam quality over such large stand-off distances.

Although the latest demonstration was not with the kind of high-power beam that would ultimately be needed for such weapons – a ramp to 100 kilowatt is envisaged over the next three years – it does show that optics are able to compensate for the distortion caused by atmospheric turbulence, a key technical challenge for laser weapons.

Joe Mangano, the program manager within DARPA’s “Excalibur” project, says that the recent demo shows that the OPA-corrected laser can outperform conventional systems that suffer from reduced beam quality. Maintaining a good beam shape is critical to ensure that sufficiently concentrated power is delivered to a target to destroy it.

The 21-element OPA used by DARPA, which was made by Ohio-based Optonicus, comprised three identical clusters of seven fiber lasers. Each cluster measures 10 cm across.

Combined with an “ultra-fast” algorithm, the OPA is said to be able to correct for atmospheric turbulence within a millisecond.

“These experiments validated that the OPA could actively correct for even severe atmospheric distortion,” DARPA officials said. “The demonstration ran several tens of meters above the ground, where atmospheric effects can be most detrimental for Army, Navy and Marine Corp applications.”

“In addition, these experiments demonstrated that OPAs might be important for correcting for the effects of boundary layer turbulence around aircraft platforms carrying laser systems.”

Coherent combining
Future work will concentrate on ramping up the power of the laser system towards the levels required for effective military deployment, while maintaining the beam quality.

According to last week’s fiscal year 2015 budget request from DARPA, part of the wider US Department of Defense (DoD) request, the Excalibur project has also demonstrated 11.2 kilowatt of combined optical output from 16 fiber lasers, as well as coherent (i.e. spectral) combining of a 19-element OPA delivering a 21 kilowatt beam featuring tip/tilt adaptive optics.

“Each array element possesses an adaptive optic capability to minimize beam divergence in the presence of atmospheric turbulence, together with wide field-of-view beam steering for target tracking,” states the document regarding the Excalibur arrays.

“With each Excalibur array element powered by high-power fiber laser amplifiers at up to 3 kilowatts per amplifier, high-power air-to-air and air-to-ground engagements have been enabled that were previously unfeasible because of laser system size and weight.”

Optonicus projects
Optonicus, which is working on a large number of US military projects related to laser and so-called “directed energy” weapons, received funding from DARPA to continue its development of fiber-array beam projection systems in late 2012.

Around the same time, the company also received backing from the US Air Force to develop a new type of sub-aperture wavefront sensor for optical fiber phase-array systems that could be used in directed energy, astronomy, and optical communications applications.

Similar awards followed in 2013 from the US Navy, the Joint Technology Office and the Air Force again, including funds to develop what it calls the “Advanced Phased Array for Conformal, High Energy” (APACHE) approach.

Here, each of the system sub-aperture modules is composed of multiple adaptive beamlet elements. The modules can then be clustered to deliver a phased combined beam that scales to tens of kilowatts of total power.

To further develop optical sensing of atmospheric turbulence, in October 2013 Optonicus won Air Force backing for a set of sensors capable of operating at three different wavelengths and over a propagation distance of more than 100 km. This project is set to demonstrate both near and far-field measurements of major atmospheric turbulence, laser beam and image characteristics – measured simultaneously at several spatially separated sub-apertures.

Cooling challenge
Other key challenges in raising the output of the laser weapons include dealing with the immense amount of heat generated, and mitigating those effects. Even for a fiber laser system operating at a highly efficient 35 percent, with 100 kilowatts of optical output the cooling requirements are huge.

According to the FY 2015 DARPA budget request, technology developed under the Excalibur program is set to be extended under the related “Endurance” project. It aims to develop pod-mounted lasers to protect aircraft from more advanced surface-to-air missile threats.

The request, which must first be agreed by Congress, earmarks $13.1 million in fiscal 2015 to miniaturize components needed for high-precision target tracking, identification and lightweight agile beam control. Another $36.7 million is set to be allocated to wider project development.