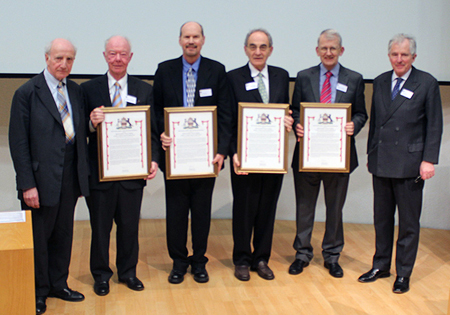 Winners: the strained layer laser developers at the prize-giving.

Rank Prizes totalling £185,000 ($307,000) have been awarded to nine leading scientists in the USA, Europe and Australia working in the fields of optoelectronics and nutrition, respectively. The awards are made bi-annually for achievements considered by a panel of Prize Committee Members, “to be of significant benefit to humanity”.

In the optoelectronics category, awards were granted for: “pioneering work on strained-layer laser structures” and for “the conception and realization of the atomic clock on a chip”. The 2014 achievement in nutrition and crop husbandry was for “pioneering the understanding of isotope discrimination in plants and its application to breed wheat varieties that use water more efficiently”.

The optoelectronics prize was shared between two projects. Firstly, £15,000 was awarded to each of the four scientists leading strained-layer laser groups: Alf Adams of the University of Surrey, UK; Gordon Osbourn, of Zunomi Llc, NM, USA; Eoin O'Reilly, of Tyndall National Institute, Cork, Ireland; and Eli Yablonovitch of the University of California.

In the second optoelectronics award, £45,000 was shared equally between a group that conceived and realized the development of an atomic clock on a chip. The recipients were Leo Hollberg of Stanford University, and John Kitching and Svenja Knappe, both of US National Institute of Standards and Technology (NIST), Boulder, Co, USA.

Semiconductor lasers are produced by the sequential deposition of many thin layers of different materials that control the optical and electrical properties of the device. Early opinion was that each layer should have the same or very similar crystal structure to ensure that the composite structure was not subjected to mechanical strain.

Adams, O'Reilly, Osbourn and Yablonovitch challenged this idea and today strained-layer lasers, using thin layers of different materials with dissimilar crystal lattice constants, dominate the entire semiconductor laser market. Approximately one billion are produced each year for a market valued at around $5 bn.

Strained-layer lasers are used in all types of optical fiber communication networks from long-haul to local area networks. High power strained-layer lasers are used as power sources for optical amplifiers, an application that requires reliable operation under-sea for at least 25 years. They are also used in DVD and Blu-ray data storage systems, printers and optical mice and, at longer wavelengths, for sensing and pollution monitoring. 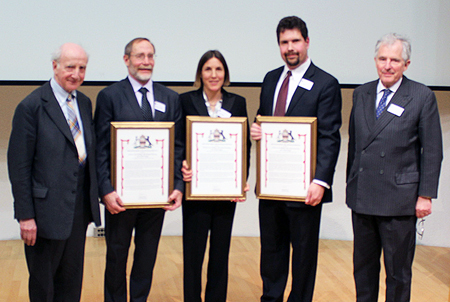 Time for a prize-giving: the atomic clock-on-chip winners.

Since 1967, atomic clocks based on cesium 133 vapor, defined the standard for the second. However such clocks were usually power hungry and bulky because they required a substantial resonant microwave cavity.

A major breakthrough in improving such clocks occurred in 2001 when Hollberg, Kitching and Knappe used MEMs technology to create a millimeter-sized cesium chamber; they presented their first results in 2002.

This work led to US research agency DARPA funding a project to develop chip-scale atomic clocks (CSACs). Such clocks are now commercially available for about $1500, but are expected to become cheaper as sales volumes increase. Measuring just 40x35x11mm, weighing 35g and using only 100mW of power these micro clocks pack a punch when it comes to accuracy: +/- 1s in 300 years, which is typically three orders of magnitude better than the original crystal atomic clocks.

The two areas of research covered by The Rank Prize Funds - on the one hand human and animal nutrition and crop husbandry and on the other optoelectronics - relate to the fields into which Lord Rank's career led him: flour milling and the film industry.