Fusion with fuel gain demonstrated for first time at the giant laser facility in California. 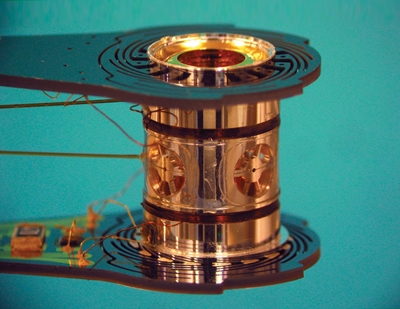 Reporting recent experiments in the journal Nature online, Omar Hurricane and colleagues at the California lab say that they have achieved a fuel gain greater than unity – the first time that has been achieved with inertial confinement fusion.

Although it does not represent the ultimate goal of “ignition”, it does represent a key step along the way to achieving something that could – in time – be used as a vast and clean source of energy. The breakthrough has resulted from modifying the laser pulse shape used to compress the fuel, and follows the same team's report of record neutron yields last summer.

Hurricane and colleagues detail a series of results that showed an order of magnitude improvement in yield performance over past experiments. Earlier work at NIF had become problematic when scientists there found that their experimental yields were not able to match what had been predicted by physical models.

But with the latest results now corresponding much more closely to computer simulations, it appears that the NIF team is gaining a better understanding of the detailed physical processes involved in inertial confinement fusion – something that bodes well for pushing towards the ultimate goal of ignition.

"What's really exciting is that we are seeing a steadily increasing contribution to the yield coming from the boot-strapping process we call alpha-particle self-heating as we push the implosion a little harder each time," said Hurricane in an LLNL statement.

Feedback mechanism
So-called “boot-strapping” occurs when alpha particles produced in the deuterium-tritium (DT) fusion process deposit their energy back into the DT fuel, rather than escaping. That increases the rate of fusion reactions, producing more alpha particles, and it is this feedback mechanism that leads to ignition.

The Nature paper states that the boot-strapping process has been demonstrated in a series of experiments in which the fusion yield has been systematically increased by more than a factor of ten over previous approaches.

According to the lab, a key change in the latest experiments was designed to avoid break-up of the plastic shell that surrounds and confines the tiny capsule, or “hohlraum” of DT fuel as it is compressed by a shockwave generated by the 192 lasers pointing directly at it.

That break-up was believed to be the source of the degraded fusion yields observed in previous experiments, and which in 2012 led to the facility’s switch in emphasis away from ignition and towards “stockpile stewardship”, the term used to describe the simulation of nuclear weapons explosions designed to obviate the need for their direct testing.

Altering the laser pulse shape to a “high-foot” implosion method is believed to have reduced instabilities in the plasma generated during DT fusion, suppressing the effect thought to cause the break-up of the plastic shell previously.

NIF’s chief mission remains stockpile stewardship, but the work suggests that a critical hurdle has been overcome. “These experiments show an order-of-magnitude improvement in yield performance over past deuterium–tritium implosion experiments,” reports the NIF team.

“We also see a significant contribution to the yield from alpha-particle self-heating and evidence for the ‘bootstrapping’ required to accelerate the deuterium–tritium fusion burn to eventually ‘run away’ and ignite.”