Conference presentation describes how hyperspectral imaging is aiding surgeons in the operating room. 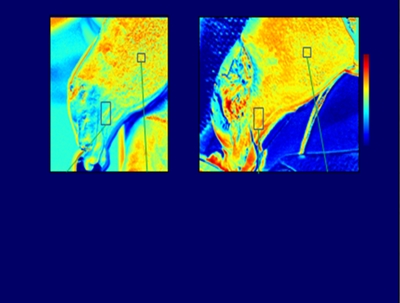 by Ford Burkhart in San Francisco
Hyperspectral imaging (HSI) has helped a surgeon weighing up a potential amputation know exactly what to remove and what not to remove, a conference session heard last week.

Using the technique to monitor oxygen levels in tissues, the instant analysis showed details of a patient’s foot, marking high and low blood oxygen in red and blue respectively.

Speaking at the “MOEMS-MEMS” symposium, part of the Photonics West event held in San Francisco last week, Dr. Javier La Fontaine, an associate professor of plastic surgery at University of Texas Southwest Medical Center in Dallas, showed slides of the injured foot. He said that his first impression had been that both the fifth and fourth toes would have to be removed. But an HSI scan changed his mind, and the fourth toe was saved.

“It has saved some patients time spent in returns to the operating room,” La Fontaine said. “It lets us more comfortably address the severity of the wound infection.”

“Having an idea of how much oxygen is at a surgical site is something we cannot see with the naked eye,” La Fontaine added. “It helps us make fast decisions.”

He was speaking in a session entitled “emerging digital micromirror device-based systems and applications”, held jointly at Photonics West with the BiOS symposium’s conference on “imaging, manipulation and analysis of biomolecules, cells and tissues”.

Re-infection risk
Surgeons routinely need to amputate because of infection or because of the lack of blood flow to a part of the body, known as ischemia.

La Fontaine said the HSI images help him decide exactly how much dead tissue needs to be removed. “If you take too little, the wound can get re-infected,” he explained. “That can lead to a return to the operating room and can lead to a greater level of amputation.”

At the heart of the HSI instrument that he used is a Texas Instruments (TI) digital micromirror device, or DMD - a set of millions of tiny mirrors, each measuring about 10 µm*. The kit generates high-resolution images to indicate the presence of certain molecules.

TI first developed the technology way back in 1996 for video projectors, but new applications range from medicine to photolithography, said Michael Douglass from the company. At the accompanying Photonics West exhibition, TI showed how its digital light processor (DLP) technology is also finding applications in dentistry and additive manufacturing.

“This is a cutting-edge example of using DMD to learn things in medicine,” Douglass said. “The DMD tells you if skin is oxygenated, and where.”

At previous Photonics West conferences, similar findings have been offered on kidneys, in animal models showing the timing of kidney tissue being starved of oxygen, and in cancer studies. Clinical trials of DMD applications in cancer are just getting started, Douglass added.