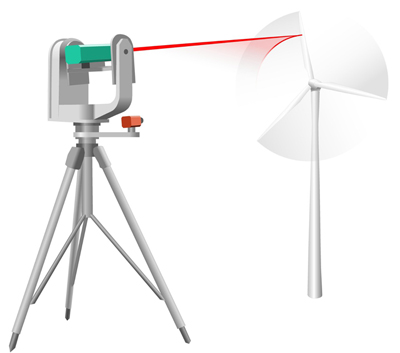 The laser system tracks the motion of the turbine rotor blades.

The rotor and mast of a wind turbine can oscillate significantly even in normal operation – with potentially damaging consequences. Analysis of these oscillations plays an important role when the equipment is being developed and maintained.

Now, the Fraunhofer Institute of Optronics, System Technologies and Image Exploitation (IOSB) has developed a laser-based observation system to remotely measure the oscillatory pattern over a turbine’s entire structure from several hundred meters away. The laser tracks the motion of the rotor blades while remaining exactly at the same position on the surface.

Dr. Ilja Kaufmann from the Optronics Department of the Fraunhofer IOSB in Ettlingen, Germany, commented, “Wind turbines oscillate with displacements of up to one meter in magnitude, even at normal wind speeds. This represents a large load for the structure, which can lead to damage and worst case to failure of an installation. For this reason, operators need to check continuously how strong the oscillations are – conventionally by using sensors built into the mast and rotor blades.”

The disadvantage of this approach is that measurements are only made at the locations where the sensors were mounted. “Obtaining a comprehensive oscillatory pattern over the entire installation is impossible using this technology,” Kaufmann added.

Kaufmann and his IOSB colleagues have developed a system to solve this problem, which will make its public debut at the forthcoming CeBIT technology expo in Hanover, Germany, between March 10-14. The monitoring system is an IT-based tracking system combining a camera and a laser mounted on a head that can pan and tilt to follow the rotor blades.

The camera system – which is compact and easily transported – records images of the installation, which are processed to build a model of the rotary motion. The camera simultaneously collects data about the exact position of the 2-3cm laser spot on the rotor blade in order to stabilize it on the revolving surface.

“Significantly more comprehensive analyses can be carried out very quickly than are possible using fixed sensors,” says Kaufmann. “The measurement interval is variable: the slower the oscillations, the longer the period that the laser takes measurements.”

“Many wind farms in Germany have been running for at least 20 years already – often approaching their maximum operating life. Operators can use our technology to evaluate their installations. We can provide decision-making assistance for lifetime and replacement questions.”

At CeBIT, the scientists will be displaying a prototype of the diagnostics system. Visitors can trace the path of the low-power laser beam’s green dot on the rotor blades of the six-foot wind turbine model at the Fraunhofer booth (hall 9, booth E40).