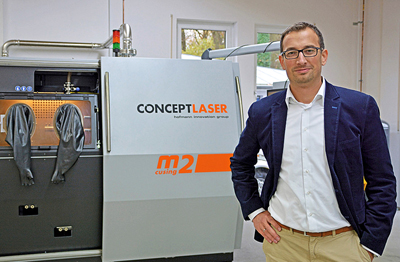 The continued and rapid growth in the demand for components produced by the generative part manufacturing process, also known as laser additive manufacturing, has been a key driver in the decision by Concept Laser to open a new development center at the company’s headquarters in Lichtenfels, Germany.

The 600 m2 R&D center increases the capacity for the testing and development of Concept Laser's LaserCUSING process. This uses a high energy fiber laser, directed using a galvo scanning unit, to fuse metal powder in layers and build up metal components for a wide range of industries.

For development engineers, the center offers a suitable platform, not only for process development, but also for the development of new Laser Additive Manufacturing (AM) systems, such as the recently-launched LaserCUSING System X line 1000R in XXL format.

Florian Bechmann, Head of Development commented "The number of test reports produced by our development department has already risen by 30% from 2012 to 2013. The new development center will raise our capabilities to a new level, in terms of time, quality and volume."

The AM sector is expected to see a further growth spurt in terms of development. Numerous application areas within medical engineering, turbine engineering or within the automotive industry are currently undergoing a significant move away from traditional technologies towards generative 3D printing processes on an industrial level.

Some of the strongest drivers of this change in approach are players in European markets, such as Astrium Space Transportation, which is part of the EADS Group, or the German Aerospace Centre, pan-industrial EU projects, such as Amaze; however above all it is also companies from the NASA environment through to large-scale American aerospace manufacturers. Furthermore, Bechmann also emphasizes the clear advantages that LaserCUSING provides for sustainable, environmentally friendly production.

The additive manufacturing industry is now at what Jim Ricchiuti, a senior equity research analyst at Needham & Co calls “an inflection point”, with implications for developers of certain lasers and photonics systems. 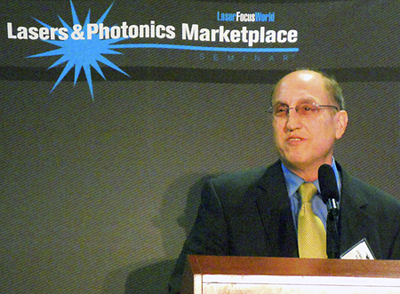 He told the Laser Marketplace Seminar, held earlier this month in San Francisco: “Awareness of long-term capabilities of the technology has now penetrated executive ranks of large global manufacturing companies.

"Thermoplastics have dominated applications so far, but additive manufacturing of metals is expected to be a major growth driver for industry over the next several years. Metals-based AM represents an attractive opportunity for suppliers of industrial lasers.”

"Another change is that larger-scale AM is now on the horizon, so machines will have to become larger and faster. Ricchiuti added, “With ongoing technology advances, today’s industry forecasts could actually be rather conservative.”