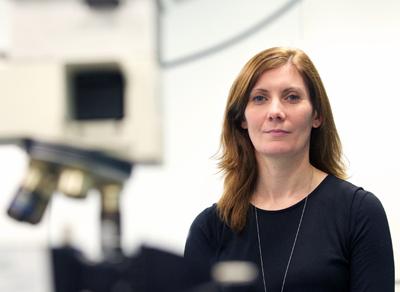 Faulds and her team have developed a new photonics-based test for meningitis.

A new photonics-based test for meningitis – which could help deliver faster and more effective treatments for patients – has been developed through research led by the University of Strathclyde, Glasgow, Scotland.

The onset of meningitis is often rapid and severe, particularly when a bacterial infection is the cause and the latest research could speed up diagnosis, leading to better outcomes for patients.

Dr Karen Faulds, a Reader in Strathclyde’s Department of Pure and Applied Chemistry, who led this study, commented, “Meningitis is a hugely virulent and, in some forms, potentially highly dangerous infection. The type of antibiotic used to treat it depends on the strain of meningitis, so it is essential to identify this as quickly as possible.”

Several types of bacteria cause meningitis and each is sensitive to different antibiotics. Dr Faulds and PhD student Kirsten Gracie, from the Centre for Molecular Nanometrology at Strathclyde – with partners at the University of Manchester – used a spectroscopic imaging technique known as SERS (surface enhanced Raman scattering) to identify which bacteria were present in a single sample, with a view to analyzing cerebral spinal fluid from patients suspected to have meningitis.

Dr Faulds said: “The great advantage of the SERS technique is that it gives sharp, recognizable signals, like finger printing, so we can more easily discriminate what analytes – or chemical substances – are present in a mixture.”

A series of DNA probes, containing dyes detectable by SERS, made it possible to single out the different pathogens, three types of which - Haemophilus influenzae, Streptococcus pneumoniae and Neisseria meningitidisis – were tested for. The faster the type of bacteria can be identified by DNA analysis, the faster patients can receive the most effective antibiotic for their condition.

This also reduces the need for broadband antibiotics, overuse of which is increasing bacterial resistance. Combining the SERS technique with chemometrics – data-driven extraction of information from chemical systems – means the amount of bacteria in a sample can be measured whilst simultaneously identifying the bacteria. The chemometrics work was carried out in collaboration with Professor Roy Goodacre at the University of Manchester.

The researchers believe the new test would be particularly useful where co-infection of multiple species is common and identifying the dominant pathogen present would allow targeted treatment. The study was published in the journal Chemical Science.