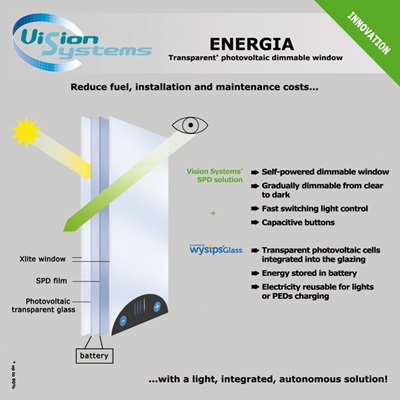 France-based Vision Systems Aeronautics has launched a new and faster electronically dimmable window that could also be used by aircraft passengers to charge electronic devices in the future.

Unveiled at the 2014 Middle East Business Aviation (MEBA) event taking place this week in Dubai, the window is based on “smart glass” technology first developed by US-based Research Frontiers.

Vision Systems Aeronautics is one of more than 40 licensees of that technology, on a list that includes major players such as Daimler – which uses dimmable glass in various Mercedes-Benz cars - as well as glass giants Saint-Gobain and Pilkington.

The French company, which has a production unit in Florida, launched a range of shading systems at the Dubai show, including the latest version of its “Energia” product.

It is a 3.44 mm-thick dimmable window that also features transparent photovoltaic cells integrated into the glazing. That allows energy storage in a battery to provide the dimmable window with electricity – while any excess energy generated in flight could be stored and then used to charge up other devices.

“The prototype will include a USB socket to charge a smartphone as well as a reading light,” said the firm, adding that the latest version is able to produce more power than the previous prototype (20 Watts per square meter).

“Because of patented SPD-SmartGlass film inside, you can touch the window and instantly change its tint within 1-2 seconds,” it claims. “This is a substantial difference over the minutes it currently takes passengers to change the tint of their EDWs on aircraft using electrochromic technology.”

Light valves
“SPD” is short for the “suspended particle device” technology developed and licensed by Research Frontiers, and described by the company as “light valves”. It comprises a film in which light-absorbing microscopic particles are dispersed within a liquid suspension.

The SPD emulsion is enclosed between two plastic substrates coated with a transparent conductive material. The particles are said to be capable of absorbing 99.9% of visible light hitting the window, and have a similar blocking effect on ultraviolet light.

When an electrical voltage is applied, the particles align to allow light to pass through the window. This gives users a range of transparency where light transmission can be rapidly varied depending upon the amount of voltage applied.

The basic SPD technology is not new in the aviation world, with more than 30 aircraft models already said to feature it – largely executive-style jets. The first of them was a LearJet 25C, fitted out back in 2001, while it will also be included on board the new HondaJet that is set for initial deliveries early next year.

Automotive demand
Similar technology is now finding its way into much larger commercial aircraft such as Boeing’s Dreamliner, and Research Frontiers believes that there will be an annualized demand for 157,000 aircraft windows in the coming years.

However, the Woodbury, New York, firm currently derives the bulk of its sales via royalty payments from the automotive sector. It receives between $100 and $150 for each Mercedes car featuring the technology that is sold.

Next year, the car company is set to use the smart glass in the “Magic Sky Control” panoramic window option on several of its new S-Class Coupe and Sedan variants.

That should help to improve Research Frontier’s financial performance. For the first nine months of 2014, the Nasdaq-listed firm posted an operating loss of nearly $3 million on sales of only $1.16 million as Mercedes reduced the production level of its earlier models featuring SPD glass.

“Royalty revenue levels attributable to sales of the S-Class are expected to accelerate after the third quarter of 2014 from the introduction of the S-Class Coupe, which will be available in dealer showrooms early in the fourth quarter of 2014,” noted the firm in its latest financial update.