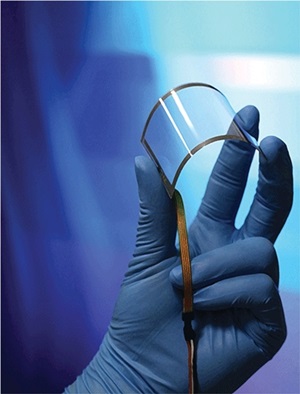 A research team from IMEC and Ghent University has presented details of what it claims is the first integrated graphene optical electro-absorption modulator (EAM) capable of genuine broadband operation.

The 10 Gb/s device, revealed at the annual International Electron Devices Meeting (IEDM) taking place this week in San Francisco, is said to outperform state-of-the-art modulators based on silicon germanium (SiGe).

Among graphene’s myriad remarkable properties is that its optical absorption can be tuned extremely quickly and over a very wide spectral range – making it an ideal candidate for optical modulator applications.

Combined with the potential for such devices to be packaged into a very small footprint, the technology could provide a low-cost way to bring the lightning speed of optical communications right down to the level of interconnections between chips.

According to the IEDM paper, the new EAM comprises a 50 µm-long graphene-oxide-silicon capacitor structure, fabricated on top of a planarized silicon-on-insulator (SOI) rib waveguide.

“For the first time, high-quality optical modulation was demonstrated in a hybrid graphene-silicon modulator, at bit rates up to 10Gb/s,” says the team, also quoting key figures including an optical insertion loss below 4 dB and extinction ratio of 2.5 dB, obtained over an 80 nm wavelength range around a 1550 nm center wavelength.

Temperatures of up to 49°C appeared to have no detrimental impact on performance, leading the team to its claim that the device outperforms state-of-the-art SiGe EAMs.

“Breakthrough result”
Philippe Absil, director of the 3D and Optical Technologies department at IMEC, said that the “breakthrough result” illustrated the huge potential of graphene-based optical modulators. “Future work will focus on further improving the modulation speed of our graphene EAM, similar to the speed obtained in highly optimized Si(Ge) modulators [operating at] 30-50 Gb/s,” he added.

In their paper, the team stresses that one of the key requirements needed to realize high-density, low-power optical interconnects capable of linking high-performance logic chips is athermal operation.

They made their device from a single layer of graphene, grown by chemical vapor deposition on a substrate and then transferred to the silicon chip using an elastomer stamp. After patterning the graphene using standard lithography and etching techniques, they used Raman spectroscopy to confirm that the graphene quality was maintained after the processing steps.

Next, they added two grating couplers to the modulator, before testing it at temperatures ranging from 20°C to 49°C.

Those tests showed wide-open eye diagrams and low jitter at speeds of up to 10 Gb/s, prompting the research team to claim a five-fold improvement over earlier devices in their paper: “This is the first demonstration of high-quality optical modulation at high bit rates by a graphene EAM,” they wrote.

They are now aiming to further refine the devices to improve their broadband operation to 25 Gb/s, which would make them more directly competitive with existing SiGe modulators.

European flagship
Earlier this year IMEC, which works closely on technology development with the semiconductor industry’s big commercial players, joined the European Commission’s flagship research program for graphene – which is set to receive €1 billion in funding over the course of ten years.

At the time Cedric Huyghebaert, who heads up the research institute’s efforts on graphene, highlighted the focus on optical interconnects: "IMEC aims to show that graphene can form the basis of practical optoelectronic devices, such as high-speed modulators and detectors, for use in low-power optical interconnects,” he said.

"During the past five years, we have built a strong knowledge in graphene device making, focused on the generic building blocks like contacting, doping and gate engineering, which are essential to progress in any graphene application.